Police surveillance discovers 2 gorillas and a werewolf in Kansas park

Shares
A police department set up cameras to investigate reports of a mountain lion in their area - and were surprised by the weird wildlife they discovered instead. 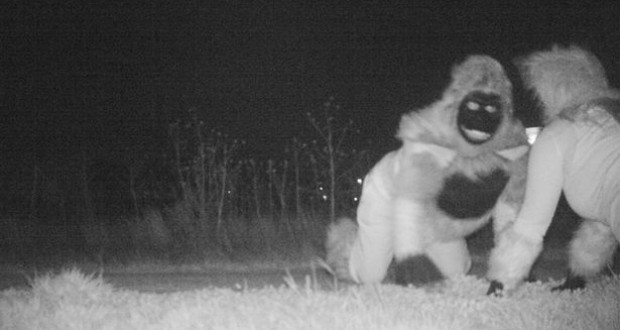 A police department of Gardner, Kansas, installed cameras to investigate reports of mountain lion in a city park – and instead get Santa Claus and even man in a gas mask running about, Mirror reports.

They found no sign of the lion when they watched the footage.

But they did glimpse two gorillas, a werewolf and a sinister man in a gas mask. There was even a cameo from a figure who looks suspiciously like a beer-swilling Santa Claus taking a nocturnal stroll. The bizarre sightings were the work of pranksters who apparently spotted the cameras in Celebration Park and donned costumes to liven up the footage. And their efforts were well received by the Gardner Police Department, which posted on Facebook: “We would like to sincerely thank the persons responsible as it made our day when we pulled up what we expected to be hundreds of pictures of coyotes, foxes and raccoons.

“Thank you to the citizens who noticed the cameras. Your effort and sense of humor are greatly appreciated.”

The prank also greatly amused locals, who hailed it as a sign of Gardner’s sense of humor.

Tiffany Leigh Reynolds posted: “I still laugh every time I see someone share this.”

Sam Austin said: “The people of Gardner Kansas have a great sense of humor, this was really entertaining.”

Diane Boyton even speculated that the unknown prankster’s scary costumes might have frightened off any real mountain lions, which on very rare occasions have been known to attack humans.

She said: “This is funny. Now you will not have to worry about the mountain lion. He left because of the wild life in this place is crazy.”