Shares
Rachel Burden and John Kay of BBC Breakfast thought they were going to interview a man "bravely" scaling Mount Everest, but got the wrong guy entirely. 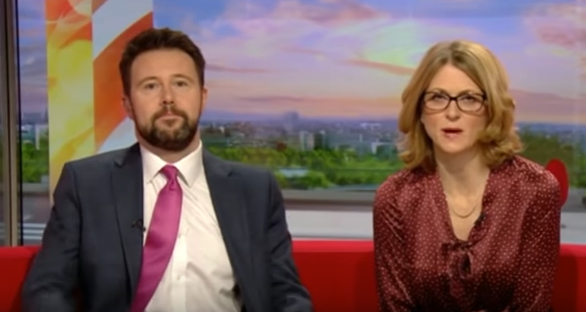 Embarrassingly, Burden and Kay thought British climber and former soldier Leslie Binns, 42 was with them in the studio, Mirror reports.

But he wasn’t, he was somewhere else. Binns is going to Mount Everest for a second time, having famously aborted his first attempt to save another mountaineer in trouble, Sunita Hazra.

In the studio was Dr Todd Landman, an academic, magician, and public speaker, who was going to discuss the situation in the US, and Vladimir Putin.

“I think you’ve got the wrong guest, sir,” Landman says after the mix up. He styles it out well. And, to be fair, the presenters do too. It’s good news all round. TV gold.

“You look so heroic,” Kay says, before Burden quips, “Mmm, he doesn’t necessarily look like a mountaineer.”

The clip reminded another hilarious situation ten years ago. In May 2006, a Congolese taxi driver called Guy Goma showed up at the BBC Television Centre to interview for a job as a data support cleanser.

When a BBC staff member turned up to reception asking for someone called ‘Guy’, he assumed it was him, and ended up talking on national television about Apple’s legal battle with record label Apple Corps.

It was incredible. BBC News 24 had supposed to talk to tech expert Guy Kewney. Guy Goma was much more entertaining, though.