Home / Humor / ‘Don’t you ever try to mess with Mr Putin’: parody video suggests Russian president will lead in ‘friendship’ with Trump

‘Don’t you ever try to mess with Mr Putin’: parody video suggests Russian president will lead in ‘friendship’ with Trump

Shares
As Trump’s inauguration is just about a week away, the world is wondering how the new US President will form relations with Russia and its leader Vladimir Putin 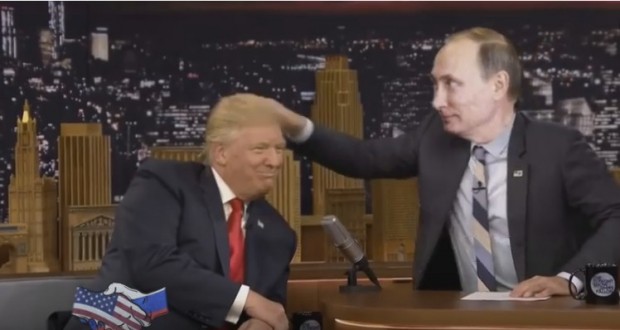 ‘Give it up for Rootin’ Tootin’ Putin!’ – a parody song, published on Youtube, suggests, inclining that the Russian president is a tough guy.
The video shows Putin as a “solid man” who “fights bears and demons with just bare hands”. Although, Donald Trump is beating a wrestler on the ground and dancing with glamorous beauties, he looks more like a subservient person in the video.

US President-elect has praised Putin as a strong leader but denied allegations of ties with Russian president’s circle.

It should be recalled that Trump’s incoming chief of staff said on Sunday that President-elect accepts the US intelligence conclusion that Russia engaged in cyber attacks during the US presidential election and may take action in response.

The video has been viewed over 2.5 million times already.