Shares
The comedy writers at Saturday Night Live ruthlessly mocked President-elect Donald Trump once again, this time over his dumpster-fire of a press conference and the allegations that Trump is being blackmailed by the Russian government. 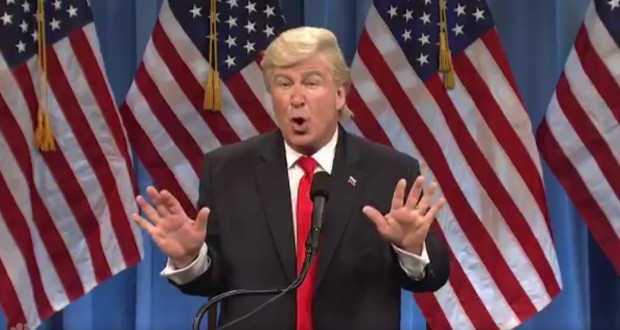 The scandal, dubbed “Pissgate” by social media, has been the source of hilarity and endless mocking by citizens on Facebook and Twitter; tonight, America’s premier sketch comedy show has taken a crack at it, OccupyDemocrats wrote.

30 Rock star Alec Baldwin returned to do his excellent Donald Trump impersonation. Baldwin opens with a somber reminder: “Yes, this is real life, and yes, this is really happening” and finishes with a flourish: “Thank you all for peeing here!”

In between jokes about the lack of inauguration and how he doesn’t want to talk about the “pee-pee” incident (“I will be bringing back a thick stream of jobs! I’m a major whiz!”), his sons make an appearance, dubbed “Beavis and Butthead.”

“Look at those two little American psychos! You can tell how good businessmen they are by how slicked-back their hair is.” jokes Baldwin.

See also: ‘Give it up for Rootin’ Tootin’ Putin!’ parody video.