Shares
Like many newspapers, the Scottish Sunday Herald included Donald Trump’s inauguration in its TV listings for the week. But, as noticed by social media users on Sunday morning, it did so in a, well, unconventional way. 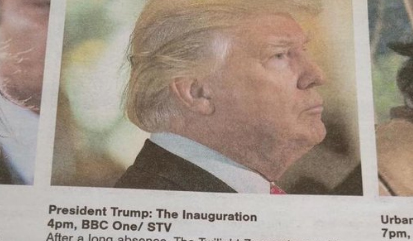 Its description of the event is merciless, starting with, “After a long absence, ‘The Twilight Zone’ returns with one of the most ambitious, expensive and controversial productions in broadcast history,” the Variety reports.

“Sci-fi writers have dabbled often with alternative history stories — among the most common is the ‘What If The Nazis Had Won The Second World War’ setting — but this huge interactive virtual reality project, which will unfold on TV, in the press, and on Twitter over the next four years, sets out to build an ongoing alternative present,” the preview goes on.

It paints a picture of a “nightmarish version of 2017,” and says that “huge sections of the U.S. electorate have somehow been duped into voting to make Donald Trump president.” “It sounds far-fetched, and it is, but as it goes on it becomes more and more chillingly plausible,” it adds.

Ending with an ominous warning, it notes, “It’s a flawed piece, but a disturbing glimpse of the horrors we could stumble into, if we’re not careful.”

Pictures of the listing immediately made the rounds on Twitter on Sunday morning, with George Takei among those applauding the paper for its take on the Jan. 20 inauguration.

As to the celebration concert, Trump’s team confirmed that Toby Keith and 3 Doors Down are among those who will perform at the ceremony.