Shares
Even if Baldwin doesn’t do any more than his usual amount of Trump, longtime fans of S.N.L. know we’re likely in for a treat. 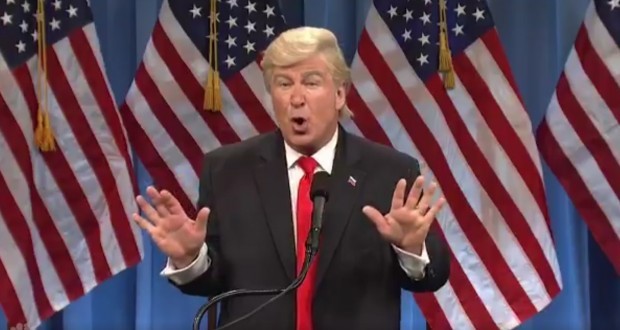 In addition to airing some of the most piercing comedic satire going about our new president, Donald Trump, Saturday Night Live has also gotten very smart about who gets invited to host, Vanity Fair reports.

Last weekend, host Aziz Ansari weighed in on the rising trend of racism in the U.S., as well as Trump’s responsibility, as president, to heal a fractured nation.

For its next episode, the show has hired Kristen Stewart—an outspoken star who was once the target of Trump’s online bullying. And for February 11—historically a Valentine’s-themed show—S.N.L. has devised the perfect love letter to its fans, in the form of their presidential impersonator and trusty Trump teaser: Alec Baldwin.

Baldwin, of course, is one of S.N.L.’s most frequent hosts. He has become even more of a staple this season, cropping up to lampoon Trump in nearly every episode.

Baldwin has adopted his role as annoyance in chief with gusto: needling the president every chance he can get, Baldwin even showed up in person outside Trump International Hotel and Tower in New York City last Thursday to do his impression for a crowd of anti-Trump protestors.

There’s also talk of Baldwin expanding his impression into a mysterious project outside of S.N.L.’s Studio 8H.

But first, it seems, we may get an idea of exactly how much of Baldwin’s Trump we can stand at any given time. The February 11 episode will allow the show’s writers to dream up presidential sketches that stretch beyond the cold open and the occasional pre-taped segment. Could we be in for an entire Trump episode? Would that be too much of a good thing?

Even if Baldwin doesn’t do any more than his usual amount of Trump, longtime fans of S.N.L. know we’re likely in for a treat. In September 2011, Baldwin beat Steve Martin’s record to become the most frequent host in the show’s long history. (Baldwin has hosted 16 times, Martin only 15.) Though Martin and possibly other S.N.L. stalwarts like Tom Hanks and Baldwin’s old boss, Tina Fey, will show up for a cameo or two. The upcoming show will be lucky number 17 for Baldwin; at this point, really, they should just make him an honorary member of the cast.