Shares
A Dutch answer to The Daily Show kicked off the trend, in which European countries farcically campaign to come second to America. 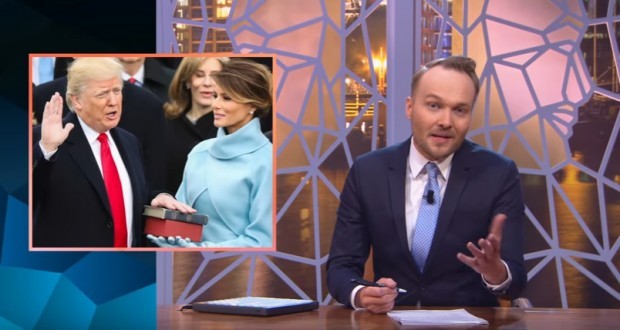 Updated Feb.8. By now, we all know that under Donald Trump’s administration guiding principle is going to be “America first”—as the president stressed in his inauguration speech. The world got the message loud and clear—and now, European countries are beginning to counter with rallying cries of their own, Vanity Fair reports.

The trend began with a viral parody video from the Netherlands. The clip, a faux introduction to the Netherlands that mocks Trump by imitating the president’s signature verbiage—”We’ve got the best words. All the other languages failed”—has racked up more than 16 million views on YouTube since last week.

Now, several other countries have hopped on the bandwagon, all sarcastically clamoring to come in “second” to America’s interests by making their cases in terms Trump can understand.

Deville Late Night, a Swiss late-night talk show, made the case for Switzerland by noting, “We have the best women. They’re all 10s. . . And we also love to treat our women badly. Love it. We didn’t let them vote until 1971. In some places, even until 1990. We grab them by the civil rights. And they let us do it.”

Over in Germany, the satirical late-night talk show Neo Magazin Royale offered, “This is the Oktoberfest. It’s the best beer fest God ever created. There is pee everywhere. You would love it. Just saying. Great pee. German beer pee. Or as we call it in Germany, Bud Light.”

Danish talk show Natholdet talked up Denmark’s “modern super-mills that produce nice, clean, renewable energy.” But, of course, they assured the president, “we can turn them into oil mills if you want, O.K.? No problem. Oil to make us, and you guys, great again, O.K?”

Portuguese late-night talk show 5 Para A Meia-Noite noted, “Our founding father and first king fought his own mother—a total bitch—and kicked the Arabs off what was to become our land. Yeah. He totally kicked them off. The Arabs. We know what you’re thinking: our first king would be a great secretary of defense. He’s dead now. Sad!”

Belgian satirical news magazine De Ideale Wereld got in on the action by remembering the time Trump called its capital city, Brussels, “a hell hole.”
“This is true; Brussels is a huge hell hole,” the video conceded. “But the rest of Belgium is great. It’s truly great. Believe me. Except for the French-speaking part, of course, because we hate them. They’re like the Mexicans of Belgium.”
“ABBA is the most famous Belgian band in history,” the video continued. “Well, they’re Swedish, but according to alternative facts, they’re Belgian. I swear. Waterloo is in Belgium anyway.”

Even Lithuania offered an entry into the canon: Internet channel LaisvesTV posted a Laikykites Ten video talking up everything the small nation has to offer, though it admits Lithuania probably doesn’t deserve second place in Trump’s eyes.

Still, that doesn’t mean Lithuania doesn’t have anything to pique Trump’s interest: “We’ve destroyed that nasty Soviet Union. We destroyed it by building a wall—a wall of people. . . It was a real human wall called the Baltic Way. It was the best wall. Enormous. Even Pink Floyd called and said that our wall was the best. It’s true. That doesn’t mean we don’t have walls now. We have Ten Walls. He is the best electronic DJ in the world. Believe us. He is also the best homophobe. You’d love him. Can you imagine? 10 walls? Not one. Not two. But 10.”

Even Switzerland—which, as noted in the Deville Late Night video, has never been part of the EU, joined the trend. All of the participating countries, along with their respective videos, can be found here. All that’s left now is to see whether or not Britain posts its own video before Brexit.

And that’s not all.

Here is a video from Italy:

And Luxemburg, where you don’t have to pay taxes!