Shares
Saturday Night Live is taking on President Donald Trump once again, and this time they’re going after his administration. 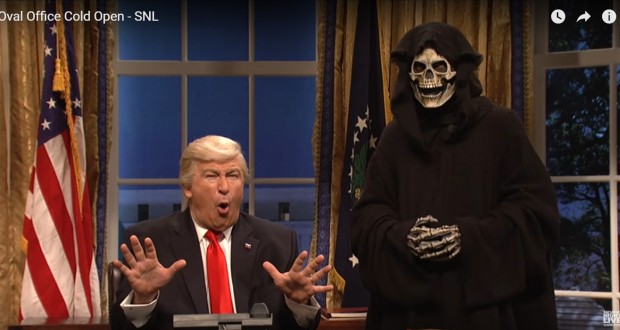 Alec Baldwin returned as Trump where he met with his closest advisor, Steve Bannon – who SNL mocked by having an actor dress up as the Grim Reaper to portray him, Joinfo.com reports with reference to Just Jared.

New York Magazine recently reported that Bannon had to be “reminded” that he is not the president after he reportedly forced the Muslim Ban.

In the video below, Bannon (aka the Grim Reaper) makes Trump leave his seat at the main desk of the Oval Office for himself as Trump has to sit in a smaller desk where he plays with a toy.