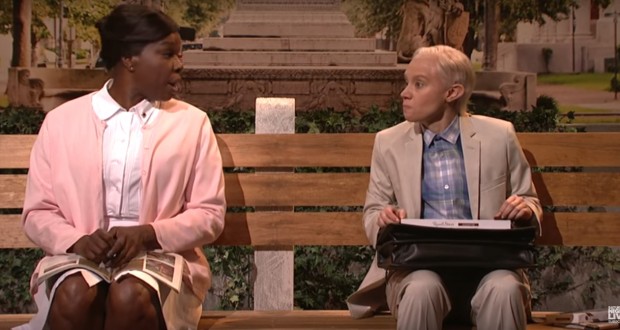 “I always say life is like a box of chocolates,” McKinnon said, before adding, “Sure are a lot of brown ones in there,” prompting Jones to leave.

“I never talked to any Russians ever,” McKinnon said, before a bus pulled up and away, revealing a new bench mate. “I talked to the Russians,” McKinnon immediately said, referring to the recent news of Sessions recusing himself from investigations into his meetings with a Russian ambassador during the 2016 election, according to Hollywood Reporter.

Later, Beck Bennett’s shirtless Vladimir Putin made an appearance. “This meeting never happened,” he told McKinnon. “I wasn’t going to remember it anyway,” she replied.

The night’s host, Octavia Spencer, also made an appearance as her character from The Help, Minny Jackson, for which she won the best supporting actress Oscar in 2012. Spencer offered McKinnon a pie which, just like in the aforementioned film, may have looked like chocolate but contained a much less palatable ingredient.

Watch the episode below: