Shares
Saturday Night Live had a lot of goofy, apolitical fun Saturday, but took some time to take the occasional dig at the Trump administration. 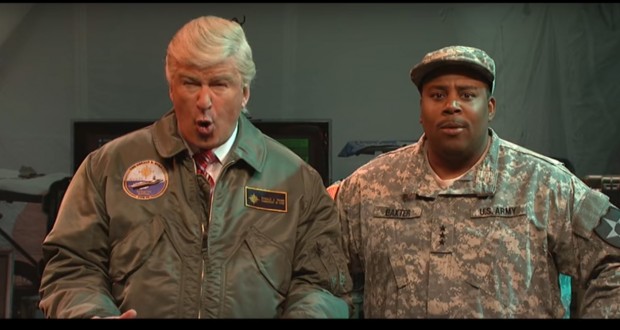 Anyone who’s seen the movie Independence Day remembers the scene when President Thomas J. Whitmore, played by Bill Pullman, gives the ultimate inspirational speech to rally the troops — that against all odds, they can fight and defeat the evil aliens bent on destroying humanity.

On Saturday, SNL imagined if President Trump were in that same position, according to NPR.

Alec Baldwin returned as Trump, decked out in a flight jacket, as Trump has been seen wearing recently. Trump tries and fails to give a similar inspirational speech to the soldiers gathered, but largely goes off topic.

In the movie, President Whitmore says: “We can’t be consumed by our petty differences any more. We will be united in our common interest.”

“Actually,” he says, “the aliens are already here. They’ve been hiding in this country for hundreds of years, it’s a fact. They’re shapeshifters. They look like regular people but they’re aliens. Look, there’s one right there.”

He points to Leslie Jones, a black woman.

“Yes she is, and so is the woman next to her, right there.”

He points to Sasheer Zamata, who is also black. She looks at Jones, and looks back. “Oh, OK. … No.”

Scarlett Johansson was the host of the show. It was her fifth time — she joined the “five-timers club.”

In a recorded fake commercial, she played Ivanka Trump. It’s an ad for a new perfume: Complicit.

“She’s a woman who knows what she wants and knows what she’s doing,” the voice-over says. “A feminist, an advocate, a champion for women, but like, how?”

Ivanka Trump has talked about women in the workforce and portrayed her father as an advocate for working women.

“The fragrance for the woman who could stop all this, but won’t,” the voice-over says.