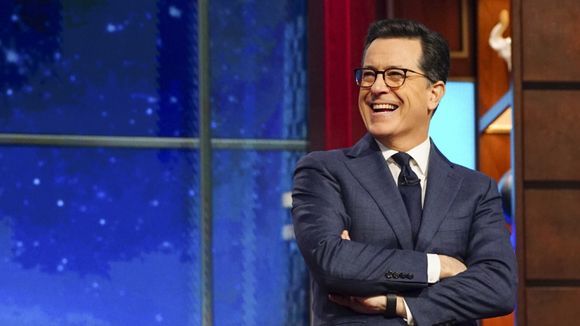 He also poked fun at “personal trainer who high fives way too hard” Paul Ryan. But he quickly transitioned from the possibility of people losing their health care to someone, in his words, “losing it”: President Trump, according to USA Today.

After reminding his audience about POTUS’ claim made via Twitter that former President Obama had his “wires tapped,” Colbert said, “Now, to believe Trump’s claims, you need a shaky grasp of reality and zero regard for the truth.” In The Late Show host’s eyes, that was a perfect segue to Sean Spicer, who assured a reporter in a clip that we can trust what the president says, “if he’s not joking of course.”

As Colbert pointed out, Kellyanne Conway also made attempts to calm “the tweet storm” during an interview with The (Bergen County, N.J.) Record.

“There was an article this week that talked about how you can surveil someone through their phones,” the presidential adviser said in the clip shown, “certainly through their television sets — any number of different ways, and microwaves that turn into cameras.”

“It’s true,” Colbert said facetiously. “Microwaves that turn into cameras. How do you think we film this show?” The camera then turned to someone manning a microwave on a tripod.

Colbert also sarcastically backed up Conway’s declaration in an interview with CNN that she was “not Inspector Gadget.”

“Inspector Gadget had all sorts of tools at his disposal,” Colbert said in agreement, “Gadget skates, Gadget ‘copter. Kellyanne Conway has only one move: Go, go alternative facts.”

Though Conway told CNN’s Chris Cuomo said she didn’t think “people are using their microwave to spy on the Trump campaign,” that didn’t stop Colbert from delivering a special message to Obama whilst grabbing a Hot Pocket fresh from the microwave. “I miss you,” he said while looking into the appliance, which doubled as a camera, obviously.