Shares
Seth Meyers focused on yet another twist the in the investigation into ties between Russia and President Donald Trump's campaign on Monday's "Late Night." 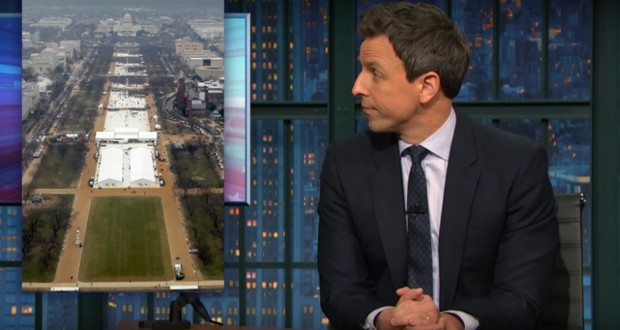 “As of right now, there is still no conclusive evidence connecting the dots that the Trump campaign colluded with Russia to help them win the election,” the host said. “But there are so many dots. We are covered in dots. The Trump presidency is basically a 6-year-old with chicken pox. And the rest of us are so f—ing itchy.”

According to Business Insider, one dot Meyers explored was the request for immunity from prosecution from Trump’s former national security adviser, Michael Flynn, in exchange for his testimony to congressional intelligence committees and the FBI.

Flynn stepped down in February, after 24 days in his post, amid reports that he had misled administration officials about his discussions with the Russian ambassador before Trump was inaugurated. Flynn also famously led “lock her up” chants about Hillary Clinton during the Republican National Convention.

“These days, Flynn is apparently trying to make sure he doesn’t get locked up,” Meyers said. “There’s been a lot of speculation and uncertainty about what exactly a request for immunity means. Does it mean Flynn is worried about criminal prosecution? Or is he just afraid he can’t get a fair hearing?”

To help answer those questions, Meyers looked to statements Flynn and Trump had made in which they referred to immunity requests as signs that a crime was committed.

But it seems Trump has changed his mind. He tweeted his approval of Flynn’s request, calling the investigation a “witch hunt.”

Mike Flynn should ask for immunity in that this is a witch hunt (excuse for big election loss), by media & Dems, of historic proportion!

“OK, but I don’t know if I would take legal advice from Donald Trump,” Meyers said. “Remember, he’s been involved in more than 3,500 lawsuits. And just to give you a sense of what 3,500 looks like, here’s a photo of 3,500 people,” Meyers said as a photo of the crowd at Trump’s inauguration popped on the screen.