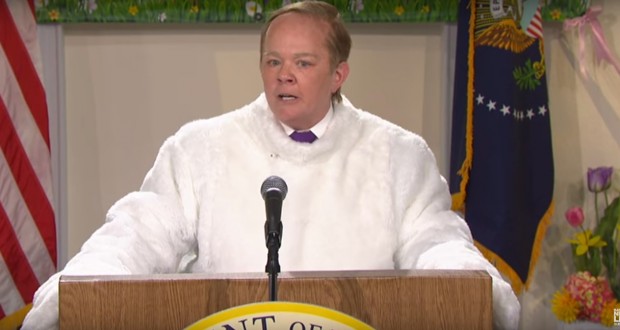 In one sketch, McCarthy’s easily agitated Spicer holds one of his infamous press briefings dressed as the Easter Bunny, Joinfo.com reports with reference to ABC News.

The sketch pokes fun at Spicer’s controversial comments this past week comparing Syrian dictator Bashar al-Assad with Adolf Hitler, which left many observers calling for his resignation.

“Everybody shut up so I can apologize,” McCarthy’s Spicer says. “You all got your wish this week, didn’t you? Spicey finally made a mistake.”

The sketch poked fun at the president’s frequent visits to Mar-a-Lago, his achievements so far, in-fighting in the White House, and North Korean leader Kim Jong-un.

“So many memories in this room,” Baldwin’s Trump says during the cold open. “This is where I met with the Chinese president.”

Bennett’s Pence corrects the president, saying, “That was at Mar-a-Lago, sir.”

Baldwin’s Trump continues, “This was where I ordered the Syrian strike.”

Yet again, Bennett’s Pence corrects the president: “That was also at Mar-a-Lago, sir.”

Says Baldwin’s Trump: “Remember when I refused to shake the hand of that little German boy?”

“Whatever his name is,” responds the commander in chief.

As the show has in the past, the cold open portrayed White House chief strategist Steve Bannon as the Grim Reaper.