Shares
Cancer vaccine becomes a reality thanks to the constant work of experts in the field of medicine. According to the results of the experiments, they managed to prove effectiveness of the drug. 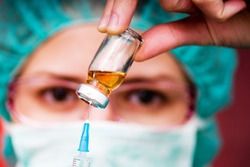 American scientists announced the development of a unique product – cancer vaccine that can stimulate immune system to fight cancer cells and program affected organism to identify cancer cells existing in it.

The vaccine was tested on animals and cell cultures and showed a positive result. After injecting the vaccine into two living beings, their immune system began destroying unicells and led to remission of a significant number of tumors.

In the experiments on mice 90% of the rodents with developed muscle cancer have recovered thanks to the vaccine. According to medicine experts, now they need to test the vaccine on humans. At the same time, the researchers note, the drug can be used for treating various forms of the disease – throat cancer, brain cancer, lung and breast cancer.

Recently, British scientists told about HIV weakening in the process of mutation. Experts believe that HIV faces strong immunity, weakens, and then spreads already in a weakened form.