Shares
According to decipherers of the prophecies, the iconic medieval soothsayer Nostradamus predicted the world many wonderful events in 2015. 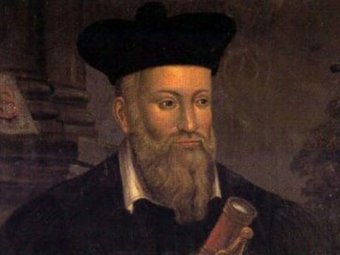 According to experts, they have managed to decipher predictions of the famous French astrologer Nostradamus for 2015.

Thus, the great alchemist predicted deaths of the leaders of four countries at once as a result of attempts. Also this year, according to the decipherers of Nostradamus, a number of major military conflicts will take place in 2015.

In 2015 Germany and France will suffer strong economic crisis, and due to a powerful earthquake the U.S. will have a humanitarian disaster. In Italy, the legendary Mount Vesuvius will awaken, and as a result of the eruption, the country will suffer numerous losses.

In addition, the prophet suggested that in 2015, scientists would invent the elixir of life, granting immortality, so many people could live up to 200 years, but they would not be happy about it as during this period the world would face strong solar radiation rays killing all living beings.

For the next year Nostradamus also predicted the abolition of taxes imposed in some countries, the right to have children only by permission, the revolt of the dead from their graves and the destruction of the language barrier. According to him, people of different nationalities and cultures will freely understand not only each other, but also animals.