Shares
On Sunday people all around the world can watch a rare phenomenon - the total "supermoon" lunar eclipse, also known as a "blood moon" 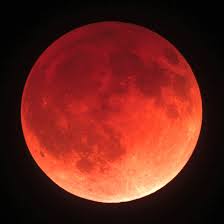 The phenomenon of “supermoon” happens when the total eclipse coincides in time with the moment when the fool moon comes at the closest distance to Earth. When Earth passes between the sun and the moon, it casts “bloody” glow on the moon, because the light scatters in the atmosphere. The moon will seem bigger in the sky, although there is no physical change in its size.

This Sunday a “blood moon” will appear for the fourth time over the last two years, what is known as a tetrad series. The last time it happened in 1982. And the next time people can observe it only in 2033.

In the U.S. the eclipse begins at 8:11 p.m. EDT, the total eclipse will start in two hours lasting for one hour and twelve minutes.

Besides, many believe that the “blood moon” predicts the end of the world. But NASA reports no asteroids or other threats coming to Earth in the observed future.