Shares
This week, a team of Canadian surgeons in the framework of the Third Medical Mission in Ukraine to perform reconstructive surgeries for activists and soldiers of ATO. The mission will run October 23 – November 1, 2015 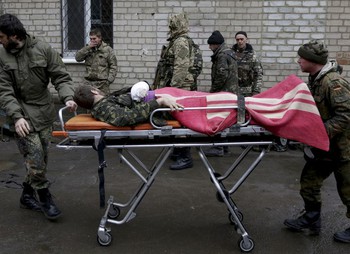 A team of Canadian surgeons arrived in Kyiv in the framework of the Third Medical Mission in Ukraine to perform reconstructive surgeries for activists and soldiers of ATO. The mission will run October 23 – November 1, 2015, Joinfo.ua reports with the reference to Radio Svoboda.

Canadian reconstructive surgeons will operate Ukrainian soldiers and victims of Maidan events in the Central Clinical Military Hospital of the Ministry of Defense of Ukraine, said the director of humanitarian initiatives Ukrainian Canadian Foundation Christina Waller.

She said also that Canadian doctors will conduct a Master Class for Ukrainian Military surgeons during the mission.

The medical mission is organized by the Canada-Ukraine Foundation under the patronage of the Ukrainian Canadian Congress. This third mission is made possible in large part by funding from a contribution from the Government of Canada under the Global Peace and Security program that was announced just prior to a visit from Canada’s Foreign Minister to the second medical mission in May 2015.

This contribution also includes funding for equipment the medical team will leave in Kyiv at the National Ukrainian Military Hospital. The Canada-Ukraine Foundation is also thankful for the support of Stryker Canada, which once again awarded the medical mission with a grant which provides for virtually all surgical hardware and implant materials for the medical procedures; as they did with the first two missions.

“We’re very grateful that the Canadian Government saw fit to support this initiative,” said Victor Hetmanczuk, President of the Canada-Ukraine Foundation. “The funding will enhance the Ukrainian Ministry of Defence medical system’s capacity to address casualties from combat and increase its access to medical tools and resources to undertake this type of operation.

“A major focus of this third medical mission will be establishing a learning partnership for years to come,” said Dr. Antonyshyn. “Our goal is to provide our Ukrainian doctors with the tools they need to treat patients between our medical missions, as the need continues to raise.”

A fourth mission is planned for February 2016.