Chupacabra found in Paraguay and China

Shares
A decomposed corpse of unknown creature, which was found in a river at Carmen del Parana, caused a sensation in Paraguay last week. People were speculating that this was a body of the legendary chupacabra 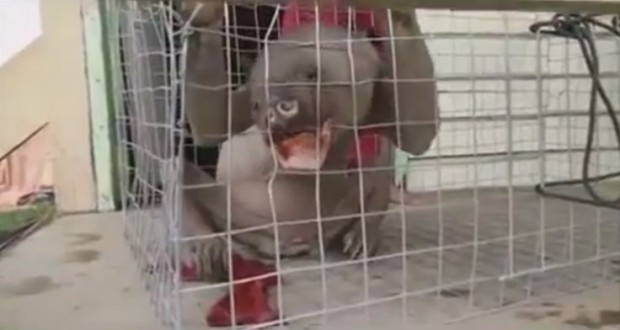 After examination of the misterious body, the local experts believed that the creature is more likely to be a monkey. Javier Medina, head of the local fire department, said that it has “little hands and feet,” leading him to believe it’s a monkey, but the body is so badly decomposed it’s hard to say for sure, Joinfo.ua reports with the reference to Huffington Post.

Medical examiner Pablo Lemir said it has long fingers like a human, but it’s not a human. But it has a tail, so it could be a monkey. Ron Pine, former curator of small mammals at the Smithsonian, told Doubtful News that it’s likely either a type commonly called the black howler monkey or a type of capuchin monkey.

Scientists believe the origin of the chupacabra legend may be coyotes suffering from severe mange, according to National Geographic. However, other animals such as raccoons and monkeys have occasionally been mistaken for the chupacabra. In other instances, animal deaths likely caused by illness are blamed on the chupacabra.

Earlier a mysterious creature was caught in the drainage system of the reservoir in China. Since then scientists research it trying to identify, what kind of “unknown little animal” it is, but they have not advanced a single step yet. Chinese monster has huge claws, a disproportionate body, impressive teeth, an ugly head and a very bad temper.