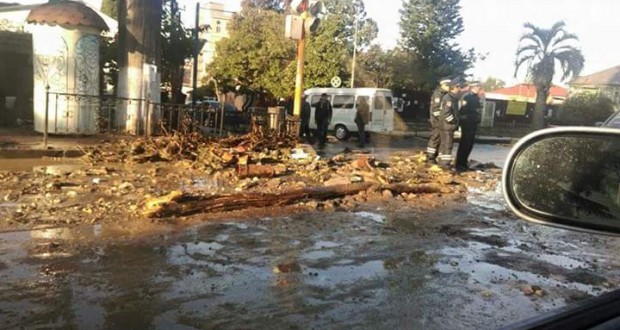 In Abkhaz resort town of Gagra flooded was flooded with “man-made tsunami”, when the town water supply reservoir broke the wall. The water flow washed away the railway, power lines and damaged several cars, as video shows. The incident occurred early morning, when no people have been on the streets yet. So, no one suffered in the incident, Joinfo.ua reports with the reference to Newsru.com. The water supply reservoir is located in the mountains above the town and contained 3.5 thousand cubic meters of water. The area was temporarily cut from the electricity and water supply. The traffic was blocked too. “The water gushed into the town, destroying everything on its way. Thank God, it happened early, at 6:30 am, and no people were on the streets, so no one was hurt. There was no massive destruction. The water flooded numerous homes, so, the emergency service has a lot of work. The neighbors help each other, “- Leo Kvitsinia,  Minister for Emergency Situations of the Republic described, what was happening. In the city administration said that the broken railway was quickly restored. The amount of damage is being calculated.