Shares
This new office Medibank building in Melbourne, Australia is to be the healthiest workplace in the world 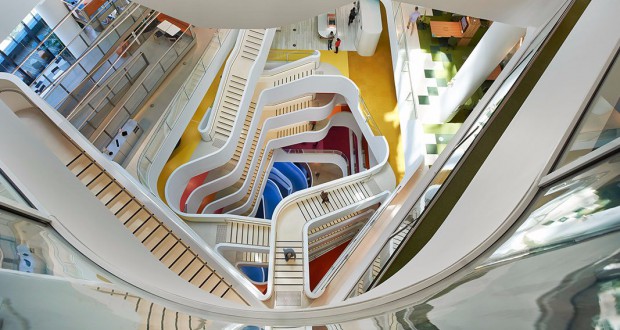 Medibank building in Melbourne, designed by the architecture firm Hassell, was built in 2014, has over 150,000 square foot of space, Joinfo.ua reports with the reference to TechInsider.

The interior is decorated with bright colors, lots of staircases, an exercise court, and lots and lots of plants.

The design is meant to keep employees moving, engaged with one another, and happy in the office.

“The new workplace was part of a major cultural change program for Australia’s largest health insurer Medibank to live its purpose to the core and create better health outcomes for its members, employees and the community,” according to Hassell’s description. Four months after moving in, Medibank said its coworkers were collaborating more, felt healthier, and were more productive, according to Gizmag. One of Hassell’s big design innovations was adding a lot of plants to the building to reduce stress and improve air quality. In addition to 2,300 interior plants, they added an edible garden off the kitchen to promote healthy eating. This is a sun-drenched meeting area. There are lots of areas for workers to destress, like at this ping pong table. There’s also a ramp that wraps around the levels and connects them. One last look at the epic office space that’s “lightyears ahead of the more traditional office buildings,” according to Hassell.