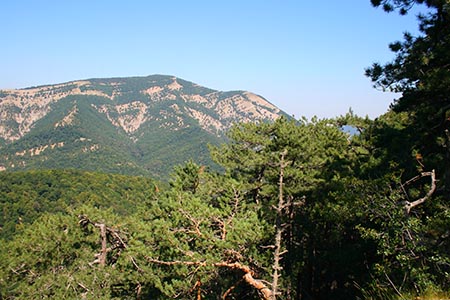 Representatives of the occupation authorities of peninsula are considering excluding Crimean pine from the Red Book of the Russian Federation in order to conduct sanitary felling of the wood. Nicholay Yanaki, the Vice Prime Minister of the Crimean Council of Ministers, said at a press conference in Simferopol, Joinfo.ua reports with the reference to Allcrimea.net.

He stated: “I and the government are working to exclude the Crimean pine from the Red Book of Russia, not because we want to cut them down and sell for the New Year, but because we need to carry out sanitary and bushing chopping.”

Vice Prime Minister also explained the decision by the situation that has arisen in Simferopol and in a number of regions of the peninsula.

“You see a large number of pines dying now, including in the city of Simferopol. We can not chop them, because they are in the Red Book. The preliminary work has already been done. So, I think, that we will exclude it (Crimean pine) from the Red Book of the Russian Federation for the Republic of Crimea in order to restore the health of this species,”- said Yanaki.