Home / Life / The most dangerous bridge, you have ever seen!

The most dangerous bridge, you have ever seen!

Shares
A bridge over Vitim river is one of the worst road bridges in the world. It is located near Russian village Kuanda in the Trans-Baikal region 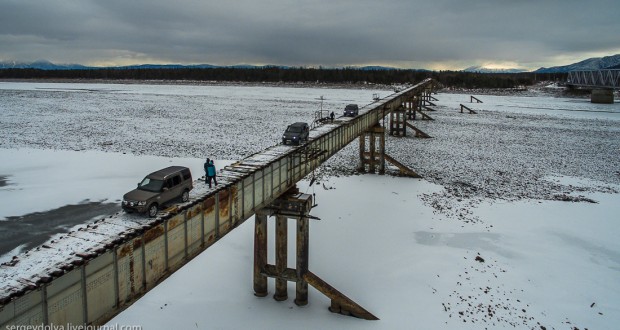 A bridge over Vitim river is one of the worst road bridges in the world. It is located near Kuanda village in the Trans-Baikal region. The bridge has never been put into operation, although it was constructed, well, at least part of it, more than 30 years ago. People, who cross this architectural nightmare, do it on their own risk, Joinfo.ua reports with the reference to zagopod.com. More than 500 meters long, the bridge is practically as wide as the wheelbase of the car. Even more, it has neither handrails no guard fence. Wooden sleepers are just loosely put on the metal base of the bridge. Strong wind over the river threatens to blow everything away from the bridge. Thus, drivers allways open windows in the cars to reduce windage. Kuanda village, were the bridge is located, once was considered as a ‘minor capital of Baikal-Amursk Mainline’. But now, like many remote villages, Kuanda is slowly dying. Double Bridge Kuandinsky experienced fires (say, for some unknown reason, it burned the locals). To secure driving, people have to nail some wooden beams to the sleepers, because there is a danger to drop the tire and stuck in the hole between sleepers. Luckily, the second half of the bridge was made more or less normal (well, as much as this word can apply to this construction). Ahead of each car walked a man, in order to control the driving and avoid the holes. It seems strange, but for 30 years of such extreme crossing, there were practically no reports about any accidents on the bridge.