Hijab with Putin caused a stir at the Russian Muslim 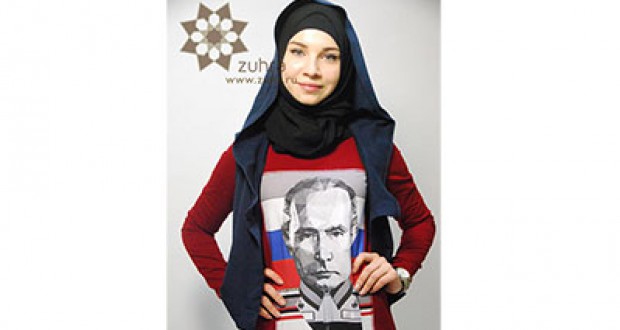 The hijab was shown at the presentation with a patriotic name “We don’t leave our people behind”, which was held recently in the frame of the International scientific and educational conference “Faith, ethnicity, nation in times of crisis and change”, organized by the Spiritual Board of Muslims of the Russian Federation with the participation of religious leaders from the regions of Russia and CIS countries, Joinfo.ua reports with the reference to Islamnews.ru. The collection of Zukhra Abushaeva made a strong impression on the audience, largely due to a red dress, with a graffiti portrait of the head of state.

Presented hijab has caused a stir among the show guests. Some of them didn’t like the hijab. During a personal communication with the audience,  Zukhra Abushaeva said that she wanted to show respect to Putin as the leader of the country.