How illustrators imagined video conference a hundred years ago 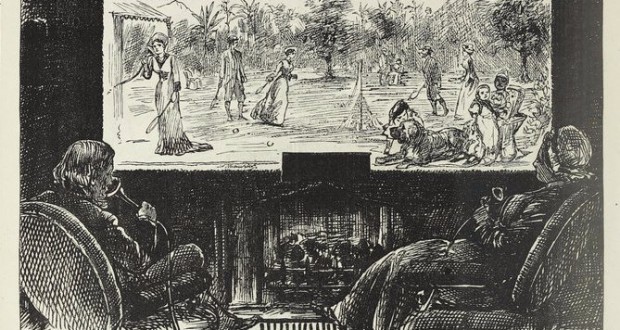 It means, people knew there would be a Skype now, over a hundred years ago, Joinfo.ua reports with the reference to the TechInsider.

In 1879 George du Maurier draw a device, which he called it “Edison’s Telephonoscope,” even though Thomas Edison never designed such an invention. It was Maurier’s imagined design for the future device, recently uncovered by The Public Domain Review.

The illustration shows a mother and father who sit at home and talk with their children, Beatrice and Charlie. After they set up an “electric camera obscura over their bedroom mantelpiece,” the father asks his daughter about the “charming young lady” by Charlie’s side. Beatrice tells him she’ll introduce them via the telephonoscope after their game.

More retrofuture illustrations of Skype-like devices followed Maurier’s, including a set of 1879 trading cards called “In the Year 2000.” One card in particular shows an invention pretty similar to Maurier’s. Two men talk with a woman, who is projected on a screen. Two decades later, another French artist imagined how his generation’s great grandchildren would live in 2012. The family’s video call spans over 5,000 miles from France to India. In the caption, the mother says, “Hello, my child. We will send you your Italian chocolate by aircraft to India.”