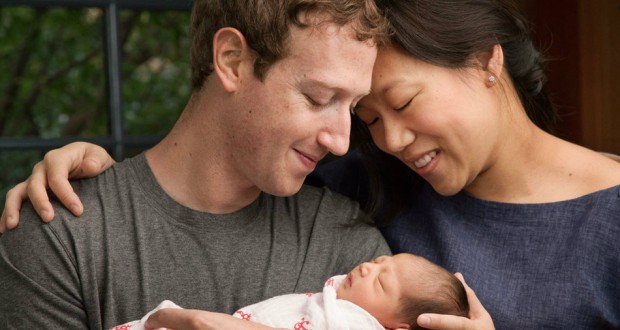 “Max, we love you and feel a great responsibility to leave the world a better place for you and all children,” Zuckerberg and Chan said in letter to their daughter, which they posted on Facebook Tuesday. “We wish you a life filled with the same love, hope and joy you give us. We can’t wait to see what you bring to this world.”

“For your generation to live in a better world, there is so much more our generation can do”, wrote Zuckerberg and Chan. So, the couple pledged to donate 99% of their Facebook stock — worth about $45 billion — “during our lives” to promote equality and the human potential, – CNN reports.

They said in the letter that starting their Chan Zuckerberg Initiative, they will “join people across the world to advance human potential and promote equality for all children in the next generation. Our initial areas of focus will be personalized learning, curing disease, connecting people and building strong communities”.

Zuckerberg drew attention again in November when he announced he would take two months of paternity leave. The choice was surprising for a highly visible CEO, and could set a positive example for other parents working in high-stress jobs.

Facebook has long offered its U.S. employees four months of parental leave. Last week, it announced it was extending paternal leave to four months for all male Facebook employees around the world.

Facebook has not yet announced if there will be an interim CEO while Zuckerberg is out.

Chan is taking an undisclosed amount of maternity leave from her job as a practicing pediatrician and position as CEO of The Primary School. The former teacher launched the free private school earlier this year with Zuckerberg. The new model of school combines healthcare and education for underserved children.