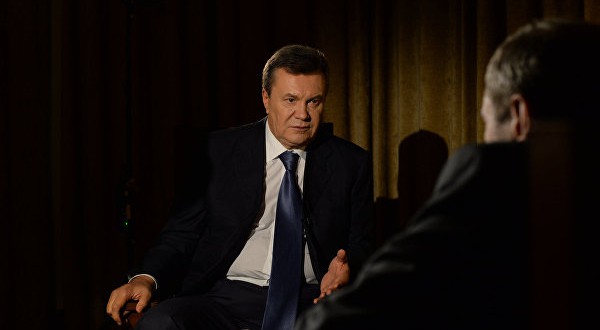 Ex-President of Ukraine Victor Yanukovych in an interview with Russian RIA Novosti said that  the current government of Ukraine and the radical parties intimidate people, journalists and politicians on Ukraine, who disagree with the point of view of the authorities, reports Joinfo.ua.

According to Yanukovych, “a man who criticizes the government is immediately declared “enemy of the people “or” agent of the Kremlin.”

“Today  in Ukraine, anyone who does not follow the current regime may end up in prison. The authorities openly use the methods of political revenge, initiate trumped-up criminal charges against their political opponents. This is pure totalitarian system of power that controls everything and everyone in Ukraine “, – said the former president.

“Unfortunately, the expectations of the people on Maidan were used for personal gain. All TV channels were in the hands of oligarchs and distorted the events on the Maidan. People were misinformed,” – he said in an interview with RIA Novosti.

According to Yanukovych, “recriminations of yesterday’s colleagues on the Maidan have finally made it possible for people to hear the truth more often.”

” The coalition openly accuses the government of incompetence, corruption. The Prime Minister and President are lobbying the interests of oligarchic clans close to him, who stood behind them since the days of Maidan,” – said Yanukovych.

He pointed out that people on the Maidan demanding democracy and freedom of speech, fight against oligarchs. But “now oligarchs have even more power.”

“Today they have their own armies at the disposal and a “pocket” faction in the parliament”, – said Yanukovych.

According to him, the people demanded higher life standards – “as a result, Ukrainians have become three times poorer.”

“And it was done very simply – by the devaluation of the hryvnia. The Ukrainian people have become three times poorer. And the oligarchs who kept their savings in USD abroad, respectively, became three times richer. And now they are going to buy up the whole Ukraine”, – said Yanukovych.

He noted that “the regime continues to feed the people with tales of visa-free regime”. “They promised him enter just a few months after the coup. But this remained a promise. And I remind you that the Association Agreement with the EU, the signing of which we delayed in 2013 in Vilnius, had nothing to do with the visa-free regime. However, media have presented it differently to the people and brought them under these slogans to the Maidan “- the former president said.

It should be recalled that yesterday Yanukovych said that he wants to return to politics, but did not specified how exactly he plans to do it.