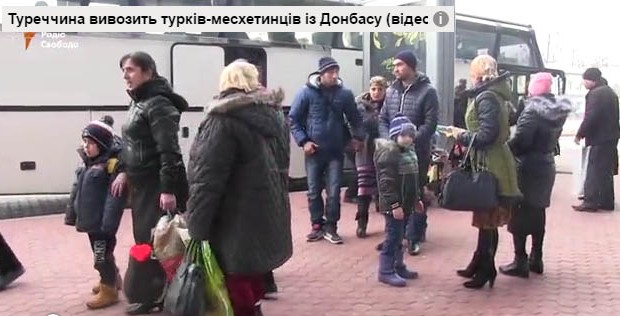 350 Meskhetian Turks from the eastern Ukraine have arrived in eastern Turkey’s Erzincan province where they will live under the country’s recently-adopted asylum measures, Daily Sabah reports.

Two Turkish Airlines planes carrying 327 people from Sloviansk city departed from Kharkiv International Airport and landed in Erzincan, where the Turkish government prepared over 30 residential buildings for the new arrivals.

The Meskhetian Turks have fled from their homes during the conflict between Ukrainian forces and pro-Russian separatists in the eastern region of Ukraine, of which the Sloviansk city was a part.

In April, Turkish Council of Ministers enacted measures allowing at least 3,000 Meskhetian Turks to be accepted by the Turkish government as legal asylum seekers.

Saffet Safarov, wearing a T-shirt with an image of Turkish President Recep Tayyip Erdogan, said he was very happy to return to Turkey, adding: “[President] Erdogan protects us”.

“Houses of around 3,000 Meskhetian Turks [in eastern Ukraine] have been damaged. They were not able to do agriculture there anymore and could not take care with their animals,” Can Tezel, Turkish ambassador to Kiev, said.

According to Tezel, around 9,000 Meskhetian Turks live in Ukraine.

Meskhetian Turks, known also as Ahiska Turks, were expelled in 1944 from their homeland-the Meskheti region in Georgia-by Soviet leader Joseph Stalin, in an attempt to remove Turks from the shores of the Black Sea.

They faced discrimination and human rights abuses before and after deportation.