Shares
On Monday, 25 Cossacks lead by their Ataman raided homes of Crimean Tatars in the occupied Crimea 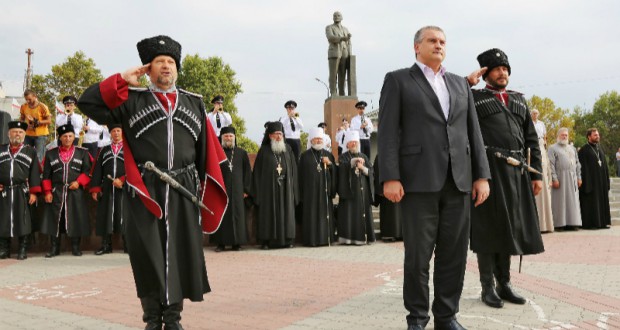 December 28, in the village Dolinka, Krasnoperekopsky district of Crimea, about twenty five Cossacks, lead by the Ataman Yakovlev and his deputy Rohman, raided homes of Crimean Tatars, as told the chairman of the local office of the Mejlis Saniye Ametova, Joinfo.ua reports with reference to 15minut.

The reason of such actions of the Cossacks was the fact that the bus stops were decorated with symbols of the Ukraine, the crosswalks were painted in yellow and blue [the colors of Ukrainian flag – Ed.] in several villages of the Krasnoperekopsky district, including Dolinka.

The Cossacks, representatives of the local Russian security service (FSB) and anti extremism department raided nine households. During the raid, as Ametova noted, the law enforcement officials behave correctly, but the Cossacks were speaking roughly, trying to enter the private courtyards, demanded an explanation.

The Crimean Tatar flag on one of the houses caused their indignation.

“This is the answer to those who resents the close attention of the international community and the Ukrainian state to the Crimean Tatars. In Crimea, when someone paints Ukrainian symbols, the local law enforcements come to the homes of Crimean Tatars, not Crimean Ukrainians’,”- commented the first deputy chairman of the Mejlis of the Crimean Tatar people Nariman Jalal.

According to Saniye Ametova, similar raids can take place in the neighboring villages tomorrow.

It should be recalled that after the illegal annexation of Crimea from Ukraine, Russia  continues large-scale repressions on the peninsula. In early November, the Ministry of Foreign Affairs of Ukraine released a statement regarding Russia’s systematic violations of human rights in the occupied Crimea. Russian repressions affect all the citizens of the peninsula, above all – Crimean Tatars and ethnic Ukrainians,” – said the statement.

At the meeting of the UN Security Council, dedicated to the observance of the human rights in Ukraine, Ivan Simonovic, Assistant Secretary-General for Human Rights, said that the situation with the human rights observance in Crimea in 2015 has not improved, and the intimidation and harassment of the people continue.

“People, who are considered as an opposition, are intimidated and harassed. Law enforcement agencies in the justice system are used as a tool for repression,”- said Simonovic. He also noted the closure of Crimean Tatar mass media and a number of arrests of Crimean Tatar activists.

Thus, on November 2, the Russian Investigation Committee in Crimea searched homes of former employees of the Crimean Tatar TV Channel ATR in the frame of initiated criminal case against Lenur Islyamov, the owner of the channel.

Now Islyamov lives on the mainland of Ukraine. He was one of the main initiators of the civil blockade of Crimea, launched on 20 September.