Shares
After Russian ruble’s fall, the mortgage borrowers walked out to protest, saying that Russian economy can not cope with the annexation of Crimea 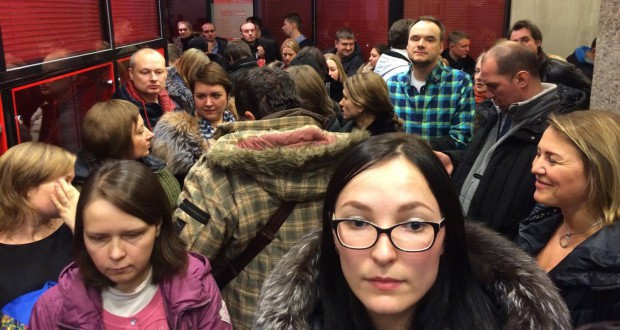 According to Russian TV channel Dozhd [Rain], Russian borrowers of mortgage in foreign currency came to banks’ offices to express their protest to the administration of the financial institutions. Some of them at Raiffeisen Bank’s office stated that Russian economy can not cope with the annexation of Crimea and offered to return it to Ukraine, Joinfo.ua reports with reference to Korrespondent.

Those who have previously received a loan in US dollars to buy an apartment, now demand allowance to pay not at the current rate, but at the rate of 40 rubles per dollar.

However, the bank’s management is not ready to take such step. Bank’s administration officials have not allowed the borrowers to enter the office and held a meeting with them for a long time.

In the video, one of the Russian women, complaining about the hard life declares: “We do not endure Ukraine [sanctions against Russia for its aggression against Ukraine and annexation of Crimea]. Let’s return Crimea – we have nothing to live on, absolutely! Where do I have to live?! In Crimea? On the street? Or in the bank’s office?!”

It should be recalled that last week Russian ruble dropped to the record low of 90 rubles per dollar and 82 rubles per euro.