Shares
Ukrainian President Petro Poroshenko honored memory of Kruty Heroes, executed by the Bolshevik Red Army on January 29, 1918 at the village of Kruty near Kyiv 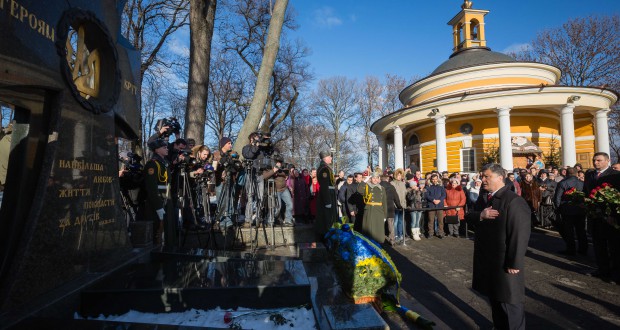 On the Day of Kruty Heroes on January 29, President Petro Poroshenko together with ATO participants and Ukrainian top officials paid tribute to the heroic feat of Ukrainians executed by the Bolshevik Red Army on January 29, 1918 at Kruty. The attendees laid flowers at the Memorial Cross in the Askold’s Grave in Kyiv and honored memory of the fallen heroes with a moment of silence, Joinfo.ua reports with reference to the press service of the presidential administration.

A unit, consisting of 400 Ukrainian students and soldiers, fought at the Kruty railway station near Kyiv against 4,000 Bolshevik soldiers, UAtoday.tv reported.
Today, many Ukrainians come and ring flowers to the Kruty Heroes Memorial.
Speaking at the memorial service, President Poroshenko said: “Our army is now being restored with tremendous efforts. We plan to increase the ranks of Ukraine’s army up to 250,000 soldiers this year. Praise and honor to Kruty heroes, but the country must be defended by well-trained soldiers, not by children.”
The President also said that Ukraine is building a real army to defend against Russian aggression, just as it was during the struggle against Bolsheviks in 1918.