Shares
The project “Winners” (Peremozhtsi) is about the defenders of Ukraine, heroes of war, who were wounded in action and lost their limbs 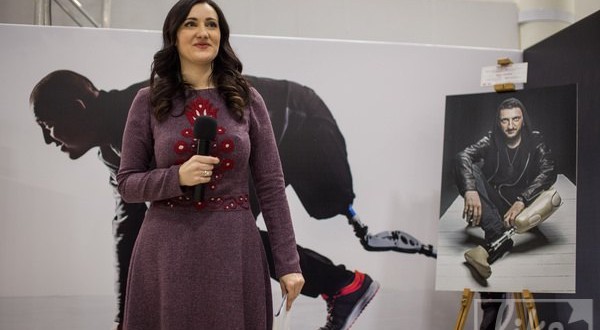 On February 3, TV anchor Solomiya Vitvitska and heroes of war, who live with prostheses, presented the exhibition “Winners” (Peremozhtsi) in the hall of the National Museum of Taras Shevchenko in Kyiv, Joinfo.ua reports with reference to Like.lb.ua. The author of the idea and the curator of the project is an anchor of 1+1 TV channel Solomiya Vitvitska. The project, which includes a photo exhibition, TV programs and a special issue of the VIVA magazine, is aimed to show the strength of spirit of young and beautiful men – defenders of Ukraine – in an inspiring photo project. Heroes of the project are the guys who, having passed the war, continue to live without legs or hands that were replaced by prostheses. The men, looking at you from the glossy black-and-white photographs, radiate self-confidence. They’re right there in the room – 18 young men. In contrast to the photos, where their prostheses are deliberately exposed, it is almost impossible to see if that elegant shoes or combat boots are put on foot or an iron construction. Presentation of the project looked like a birthday party – congratulations, gifts. All the participants of the Winners project received tourist vouchers and an annual subscription to the sports club. In the middle of the party, one of the participants, Viktor Kardash made a proposal to his girlfriend Olya. And she said “Yes.” So, the general producer of the Ukrainian Fashion Week, Volodymyr Nechyporuk, presented them a journey to London and a cruise trip for honeymoon. A special issue of the VIVA magazine hit the stores on February 4. All the raised money from the sale will go for the prostheses for Ukrainian soldiers, who lost limbs in the war.