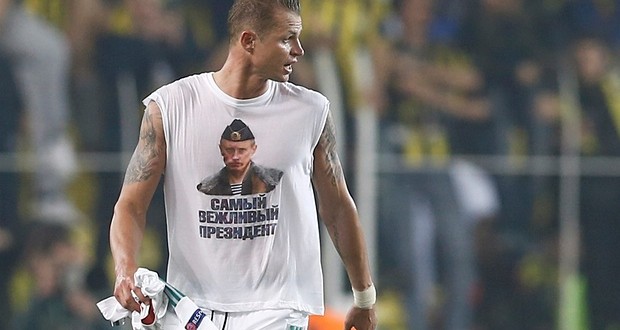 Russian footballer Dmitri Tarasov of Moscow Lokomotiv has tested already strained relations between Russia and Turkey by removing his shirt at the end of a match in Istanbul to reveal a picture of the Russian president Vladimir Putin, the Guardian reports.

Midfielder Dmitri Tarasov’s cut-off T-shirt depicted Putin in a navy cap with the words “most polite president” printed below. Putin power didn’t work in this case, as Turkish side Fenerbahçe won the match 2-0.

Ties between the two countries deteriorated in November 2015 when Turkey downed a Russian jet that it said had violated its airspace after airstrikes in Syria. Russia responded with economic sanctions, and now the countries are locked in a de facto proxy war in Syria as Ankara backs rebels and Moscow supports president Bashar al-Assad’s forces and Syrian Kurds.

The phrase on Tarasov’s T-shirt was an allusion to the unmarked troops who occupied Crimea in March 2014 and were popularly referred to as “polite people” and “little green men”, before Putin admitted they had been Russian soldiers. Turkey has condemned Russia’s annexation of Crimea and treatment of Turkic-speaking Crimean Tatars.

Police detained three people on Tuesday after bottles and stones were thrown at a bus carrying Lokomotiv fans to the match, which was the highest profile sporting event between the two countries since the downing of the jet. Several Turkish news outlets decried Tarasov’s shirt as a “provocation”.

“I didn’t want any provocations, I’m just a patriot of my country, and Putin is the president of our country,” Tarasov later told the LifeNews tabloid, adding that he might wear a Putin shirt “with a different caption” at his next match.

But European football’s governing body, Uefa, which forbids political statements during matches, is expected to take disciplinary action against Lokomotiv. Tarasov could be disqualified for a minimum of 10 matches, R-Sport news agency quoted a Uefa source as saying.

In the next match Fenerbahce will play with Lokomotiv in Moscow on 25 February.