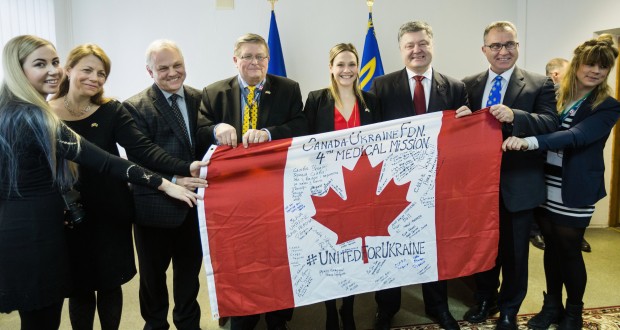 Three members of the Canada-Ukraine Foundation’s Medical Mission team were awarded with Orders of Merit from Ukrainian President Petro Poroshenko. Dr. Oleh Antonyshyn, Mission Lead and Plastic Surgeon from Sunnybrook Hospital in Toronto, was awarded the Order of Merit, and Dr. Carolyn Levis, Plastic Surgeon from Hamilton and Krystina Waler, Director of Humanitarian Initiatives from Toronto, were awarded the Order of Princess Olga. Canadian doctors have provided treatment for the wounded ATO warriors in the Main Military Clinical Hospital in the framework of the Ukrainian-Canadian joint initiative.

In the course of the meeting, the Head of State noted: “Thank you for your care. It is very easy to stay at home and say that you do not care. Your arrival symbolizes that we are not alone in our struggle against the aggressor. You are a symbol of global support for Ukraine”, Joinfo.ua reports with reference to the presidential press service.

The President expressed special gratitude to the people of Canada for helping Ukraine and reminded that at the beginning of Russian aggression in 2014, when Ukraine had had to revive its army and there had been no clothes for the military, Canada had sent containers with uniform. “You cannot imagine how many grateful words Ukrainian warriors said to Canadians at that time,” Petro Poroshenko said.

The President noted the success of the military hospital where thousands of lives had been rescued. “Today, our military hospital has become a center for international cooperation where true friends of Ukraine can help Ukrainian heroes,” the Head of State said. The President emphasized that the hospital had become a modern medical institution that can share its experience with many Ukrainian and foreign partners.

In their turn, Canadian doctors handed the national flag of Canada with signatures in support of Ukraine to the President.