Shares
A survey shows that even two years later 95% of the Russians still approve the illegal annexation of Crimea and consider this decision made in the interests of the state. 53% believe that after the annexation, Russia's position in the world improved 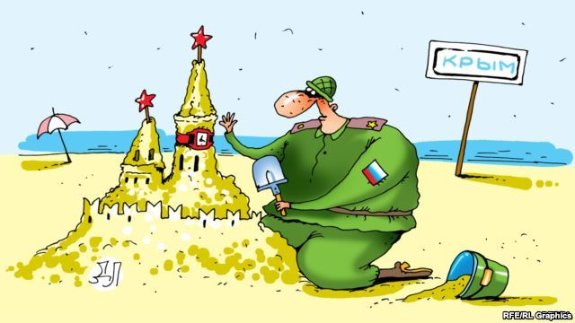 According to the study of the Russian Sociological Studies Center (VTsIOM), 79% of the Russians have a positive attitude to Crimea, another 16% were unable to answer this question by saying that he had never thought about it, Joinfo.ua reports with reference to Interfax.ru.

Sociologists point out that two years ago 89% of respondents believed Crimea was a part of Russia (according to the survey, conducted on the eve of the sham referendum on Crimea joining Russia), today – 96% of Russians do so.

According to 79% of the respondents, the inhabitants of the peninsula benefited from the accession to Russia. They note positive changes in cities and regions (27%), the growth of living standards (24%) and productive economic policies (17%).

The opposite opinion is shared by 3% of Russians. They usually indicate a problem with disruptions in electricity supplies from Ukraine, said VTsIOM.

The survey showed that 82% of Russians have heard about the disruptions in energy supply to Crimea and Sevastopol. At the same time 89% of respondents consider unacceptable the signing of the contract with Ukraine for the supply of electricity if it reads Crimea as Ukrainian. Only 6% of respondents support signing of the contract on the Ukrainian conditions, according to VTsIOM.

According to the Russians by the annexation of Crimea Russia proved that it can defend its national interests (92%), 84% think that the Western countries will finally recognize the reunification of Crimea and Russia.

53% of the respondents believe that after the annexation, Russia’s position in the world improved. And 73% said that the Crimea and Sevastopol have a key role in ensuring the country’s defense. Also, 82% of Russians believe that soon Crimea could become a world-class resort, and 63% called it the best resort in Russia.

Three quarters of Russians (75%) believe that the accession of the Crimea to Russia “was the only reason for the imposition of sanctions that would be imposed in any event.” Reverse opinion is shared by 20% of participants.

In general, for the Russians Crimea today is associated not only with the sea resorts (35%) and generally positive emotions (16%), but with the phrase “Crimea Is Ours”, the concept of “Russian Land” (37%). Sevastopol is associated primarily with the Russian Navy (29%) and the WWII (17%).

Russian telephone poll was conducted on 12-14 March among 1,600 respondents.