Scientists discover a blind cavefish that can really walk

Shares
This walking fish, discovered in the caves of Thailand by researchers from the New Jersey Institute of Technology (NJIT), is completely blind in the lightless environment of a cave, possesses evolutionary development not seen in any other living species 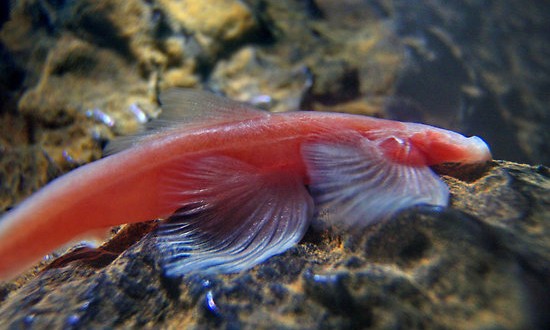 The newly-discovered fish, Cryptotora thamicola, has developed a body structure that allows it to fight against strong water currents in caves to climb a waterfall slowly using four ‘feet’ in a manner comparable to tetrapods, or four-footed mammals and amphibians, Silicon Republic reports.

Aside from the obvious interest in a walking fish in terms of modern biology, its discovery also has major implications for our understanding of the first creatures that emerged from the planet’s oceans that were capable of living, and walking, on land.

This particular fish, the research team says, has many of these same characteristics – particularly an evolution from finned to limbed appendages – that took place during the Devonian period 420m years ago.

Having now published its findings in Scientific Reports, one of the researchers, Brooke E Flammang, said of the discovery: “The pelvis and vertebral column of this fish allow it to support its body weight against gravity and provide large sites for muscle attachment for walking.

“This research gives us insight into the plasticity of the fish body plan and the convergent morphological features that were seen in the evolution of tetrapods.”