Shares
On Friday, the National Aviation University of Ukraine (NAU) hosted Dr. Olga Artyushkina, Researcher of the Sorbonne University and Head of the Center of Slavic Studies at the University of Aix-Marseilles and Sergiy Vakarin, Chairman of the Board of UkraineIs NGO, Board Member of the Ukrainian Chevening Alumni Association, Master of Management and Information of the University of Manchester. 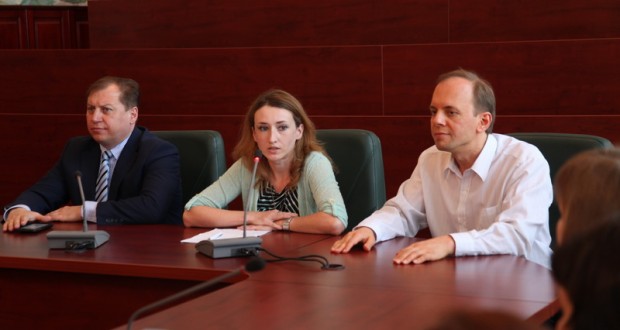 Staff and students of humanitarian, economic and technological departments of NAU and other leading universities of Ukraine have attended the meeting. At the meetingVolodymyr Shulga presented the National Aviation University and its international cooperation, including teaching of foreign students, and expressed the hope that the NAU and the Sorbonne University will establish cooperation in the areas of mutual interest. The priorities include research, professional and student exchanges and the “Horizon 2020” program. In general, higher education in France is not very expensive. For admission to the first year it is sufficient to pass the French language exam and produce official documents of secondary education.

Sergiy Vakarin described education at British universities, in particular at the University of Manchester, as well as the Chevening scholarship available from the British government for studies in the UK.

The University of Manchester has supported the spirit of free thinking since it was established almost 200 years ago, and it paid off well. For example, Albert Einstein chose Manchester University when he came to the UK for the first time to lecture about his relativity theory.

Sergiy also reminded that the famous British mathematician Alan Turing worked at the University of Manchester, where he deciphered the codes of the Nazi’s Enigma machine. This helped the Allies to defeat Hitler.

Now the University of Manchester is one of the most innovative in Europe and among the top ten in the UK, in particular, in teaching the students of IT, accounting and design.

It is important that the NAU and its institutes conduct negotiations with a number of countries to extend its exchange programs. Sergiy Vakarin congratulated the NAU with the global victory of its student Andriy Muzychenko and his Mars Hopper project at the global NASA Space Apps 2016 Hackathon where it won the first place.

Participants held a discussion on a wide range of issues of education and science, Ukraine’s image in the West and the country’s development in the context of global challenges and in view of Ukraine’s achievements in the IT industry.

Olga and Sergiy also answered the questions asked by the NAU students and teachers. “There are several possibilities to conclude an agreement on the exchange of students and teachers within various exchange programs Teachers can come, for example, to lecture at the Sorbonne University or the University of Aix-Marseille,” – Olga told.

The participants of the discussion and Volodymyr Shulga expressed confidence that the program for the exchange of teachers will launch soon.

In conclusion, Volodymyr Shulga also promised that such meetings will become a tradition, and the university management will continue to invite international guests to visit NAU.