Shares
A book that the Ukrainian writer Oleh Shynkarenko published in chunks on Facebook during the Maidan square protests in order to avoid censorship has been translated into English for the first time. 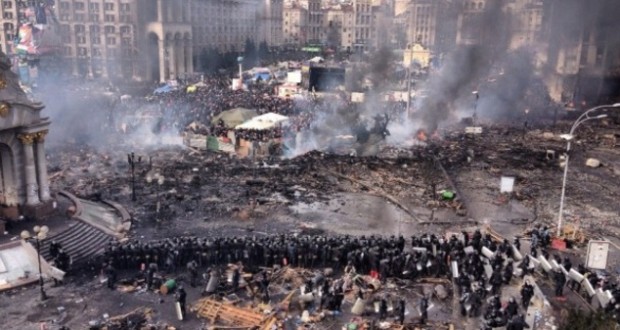 Kaharlyk by Oleh Shynkarenko, a novel that began as Facebook posts to evade censors, tells story of man whose brain is controlled by Russian army, the Guardian reports.

The journalist and author began writing his vision of an alternate reality in which Russia has conquered Ukraine while protests were ongoing in Kyiv. Index on Censorship, which publishes an extract from the first English translation in its latest magazine, said that the story grew out of a blog in 2010. In it, he joked about hoping there were radicals prepared to kill the then-president of Ukraine, Viktor Yanukovych. Shynkarenko was subsequently interrogated by security services and found entries on his blog deleted, he believes by the security services. He later turned to Facebook to tell his story of a post-apocalyptic future, echoing the violence of the “Euromaidan” protests in 2013 and 2014 in 100-word snippets.

The writer, who now works for the Ukrainian Helsinki Human Rights Union in Kyiv, has subsequently turned the story into a novel, Kaharlyk, which is due to be published by the Kalyna Language Press.

Kaharlyk “tells the tale of a man who has lost his memory because the Russian army have used his brain to control satellites,” writes translator Steve Komarnyckyj in an introduction for Index on Censorship, before the extract opens: “The wind blows listlessly through every cranny. Travelling to Kyiv on the main highway, two identical 26-storey buildings are visible by the road in the distance. They stick out, the last two teeth in a jawbone. Thus the city’s corpse lays, its head southwards. Their sole inhabitant is a mummified 45-year-old wearing elegant spectacles.”

Index on Censorship’s editor, Rachel Jolley, said: “When Maidan square was filled with burning tyres and demonstrators, [Shynkarenko] started to write a few thoughts about a Ukraine of the future. He scribbled down these thoughts on Facebook posts that he shared with his friends, after blogposts he wrote were deleted, probably by official censors.

“Facebook was a freer space and less open to the vagaries of the authorities. Some of the scenes mirrored the violence that was happening, and had happened around him… the dark world he has created is undoubtedly drawn from Oleh’s fears about the future for his country where he sees restrictions on freedom being drawn more and more tightly.”