Annual Swan Upping on the Thames

Shares
The ceremony of Swan Upping takes place during the third week of July every year. Swan Upping is the annual census of swans on the River Thames. 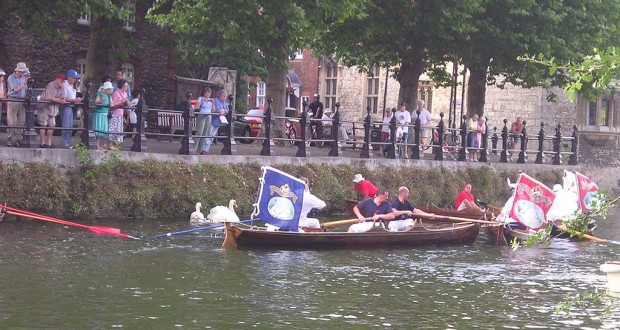 Swan Upping dates from the twelfth century, when The Crown claimed ownership of all mute swans, which were considered an important food source for banquets and feasts, the Contrary Life reports.

Today The Crown retains the right of ownership of all unmarked mute swans in open water, but The Queen mainly exercises this right on certain stretches of the River Thames and its surrounding tributaries.  This ownership is shared with the Vintners’ and Dyers’ Livery Companies, who were granted rights of ownership by The Crown in the fifteenth century.  The swans are counted but thankfully no longer eaten.

It has always been the duty of the Sovereign’s Swan Marker to count the number of young cygnets each year and ensure that the swan population is maintained.  The cygnets are weighed and measured to obtain estimates of growth rates.  The birds are examined for any sign of injury, commonly caused by fishing hooks and lines.

The Swan Uppers and Swan Markers teach local children about Mute Swans and their natural habitat, as well as the history of Swan Upping and the Royal connection to swans.