Shares
Kate Middleton, the Duchess of Cambridge, attended the premiere of the film A Street Cat Named Bob in London on Thursday night at the cinema on Leicester Square. 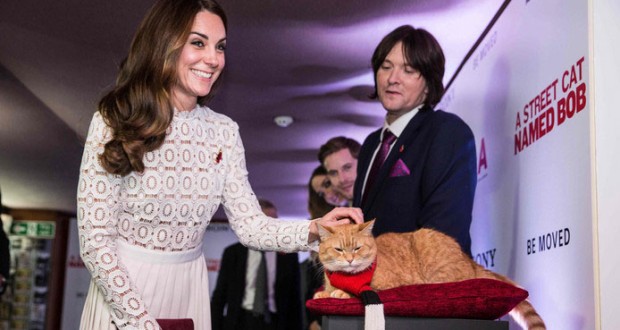 Kate met the ginger street cat, who plays himself in the film, and his owner James Bowen, Joinfo.com reports.

The film is about a recovering drug addict who meets a ginger cat that helps him. It is based on Bowen’s life. He wrote several books about his experience with Bob. The first came out in 2012. James and Bob met when Bowen was homeless and addicted to heroin.

The Duchess of Cambridge is patron of the charity foundation Action on Addiction, which is committed to addicts. The film premiere was a benefit performance.

According to Mirror, Kate was wearing a £320 dress by a new label known as Self Portrait. The full length dress featured a pleated lower half, a high neck and dazzling white crochet bodice – with a poppy pinned to her chest.