Shares
Joe Bartley, 89, started on Sunday as a waiter in the local cafe and bar in Goodrington in the south-west of the UK 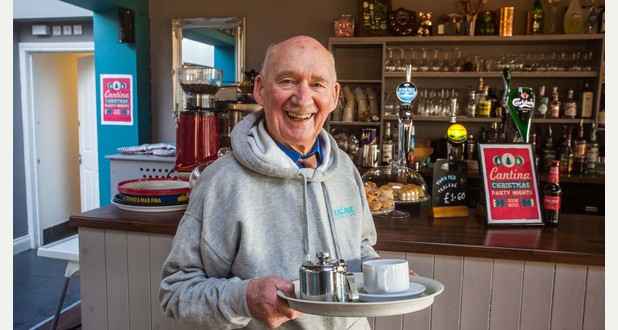 A Paignton veteran Joe Bartley, 89, who placed an advert in the Herald Express asking for a job has had offers rolling in from prospective employers, Joinfo.com reports.

Joe put the advert in the paper and said he was ‘bored’ of life sitting at home with nothing to do. He has already received jobs offers from cafe and bar Cantina in Goodrington and for seasonal work at a local Tesco.

Kate Allen, co-owner of Cantina, said that Joe’s attitude and life-experience appealed to them. He will now meet with Kate on Thursday to discuss a potential job.

“We don’t discriminate at Cantina and we are always keen to employ someone who is enthusiastic and willing to work,” said Kate.

“My business partner saw the advert in the paper and thought that Joe would be a perfect employee.”

“After hearing more about his background, I think that he will have quite a few skills that will come in handy at the cafe. We’re a busy working cafe and always want people who are willing to work hard.”

Mr Bartley couldn’t face sitting at home with nothing to do any longer so he decided to take the matter in his own hands and advertise for work in the paper.

He aimed to find something to fill his days and so he could pay his own way and no longer rely on state hand-outs.

Joe served as a signalman for the Royal Signals of the 6th Airborne Division and worked as a wireless operator between 1946 and 1948 in Palestine.

He came out of the army and but rejoined in 1958 and served under under Royal Electrical Mechanical Engineers.

He then worked as a signwriter and coach painter for seven years working in France and Germany before ending his military service in 1966.

Joe married widow Cassie in 1979 and they lived together until she died in February 2015 aged 81.

“I am pleased I have been able to get the word out. I don’t care if it is menial work – I am a working man and I just need a job.”

“My wife died two years ago and I can’t get used to living on my own and doing nothing.”

“I am so fed up of being here stuck with nothing to do. There is only so much TV you can watch or books to read.”

“I am still very capable of doing light menial work. I want a purpose to go out and the pride of having a job to go to five or six days a week. I want something to do, I want to see people and speak to people.”

“There’s nobody to talk to or see when I come home and I want to be hands-on doing a job.”