Shares
According to CTV News Montreal, nobody was injured in this slow-motion winter ballet on Beaver Hall Hill in the capital of Quebec 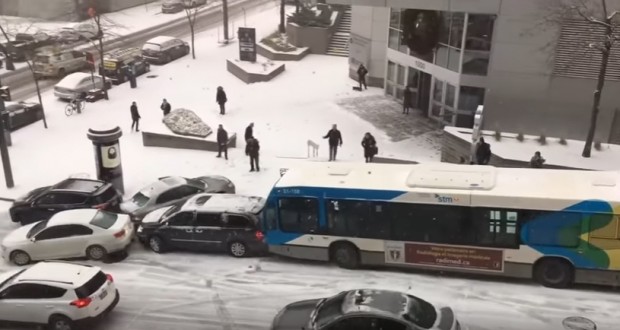 Although it is not the first snow in Canada, this time it was too difficult for several cars, buses, trucks, and even the police car to stop on the black ice that covered Beaver Hall Hill in Montreal on Monday morning, according to the report.

First, a bus heading downhill couldn’t stop and rammed into the back of an SUV waiting at the light and pushed that vehicle into several other cars.

A pickup truck coming along also couldn’t stop and rammed the back of the bus.

To make matters worse, seconds later another bus plowed slowly into the pickup truck, pushing it out of the way before it hit the first bus.

Minutes later the fire department and police closed the lower section of Beaver Hall Hill, but even then the low-speed carnage didn’t stop.

A slow-moving police car locked its tires as it slid into the curb, spun around, then drifted backwards until it bounced into the bus.

And then, several minutes later, a city of Montreal salt-spreading pickup truck lost control and slid into the police car.

Fortunately, nobody was hurt in the low speed crashes.