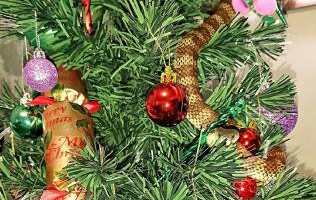 When an Australian family in Melbourne realized that an orange stripy tinsel on their Christmas tree was a deadly tiger snake they called a snake catcher, Joinfo.com reports with reference to Australian news.

“The breeding season for snakes is late August until November, and their activity often slows down in December [which is summer season in Australia],” a snake catcher Harley Jon said. “But things do get busy in the summer holidays until around April.” And it’s not only the extra snakes hiding in the gardens or under your barbecue that’s the problem — but the fact that people are home to see them.

“People are home in summer, so they actually see the snakes, whereas during the year they might not notice them around,” Jon said.