Thor the Bengal cat – a new star of the Internet

Shares
People can’t get enough of a cat in Kortenberg, Belgium, whose gorgeous fur has helped launched him to internet superstardom. 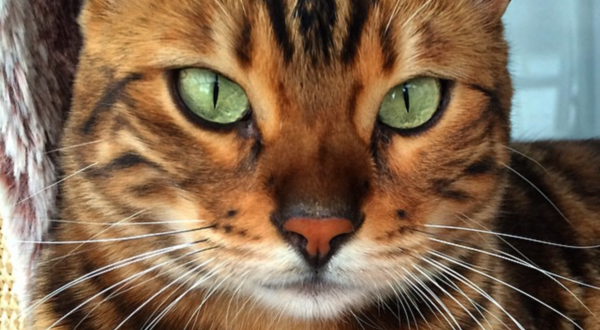 Thor is a 3-year-old Bengal cat, a crossbreed of a domesticated cat and an Asian leopard cat. The controversial felines are prized for their beauty, but some owners are unprepared for their “wild” behavior, The Huffington Post reports. A first-generation Bengal is descended directly from one domestic and one wild parent, and these cats exhibit fairly “wild” behavior and are difficult to raise as pets, according to the Wild Cat Sanctuary in Minnesota. But even later generations can exhibit wild tendencies that make them tough to handle. The sanctuary writes that they get around 20 calls each month from owners who are trying to give up their Bengal cats.

And some U.S. states and cities have laws banning or placing restrictions on Bengals.

Luckily for Thor, who has both stripes like a tiger and spots like a leopard, he appears to be very well-loved.

Thor’s owner, Rani Cucicov, fell prey to Thor’s charms when she found him at a cattery in the Netherlands back in 2013. “We actually came to look at another kitten, but then the breeder said she had another one that was available and then she came with Thor in her hands,” Cucicov told HuffPost in an email. “We immediately fell in love with his beautiful ‘orange brown’ colors.”

Cucicov knew from the beginning that Thor wasn’t a feline that you see every day. “That’s because Bengals are not so very common like normal house cats,” she said. “In our neighborhood, everyone that saw Thor for the first time was surprised because they never saw anything like him.”

“The funniest thing I read was that people were saying that Thor wasn’t real and that we just photoshopped a cat and added a tiger’s body,” she said. “Of course this isn’t true. Thor is real and definitely not photoshopped or anything. There are pictures with filters which we put on instagram or where we put more shadow etc. because the picture is too clear or light and, of course, we try to make him look best,but we never fake his colors nor photoshop him to look like a tiger or something.”

Thor may look exotic and mysterious in photos, but Cucicov says he has his silly side as well. “He loves to chase flies!” she said. “That comes in handy for us because we don’t need a fly catcher in the house.”

Apparently, Thor talks all the time and just keeps talking louder and louder until he’s given the attention he craves.

“Also, his favorite food are shrimps,” she said. “Whenever he sees or smells shrimps, he becomes crazy and screams through the whole house to get his shrimps.”

Thor also has a special ‘ritual’ before going to sleep. A couple of minutes before he gets to bed, he starts jumping on the walls in Cucicov’s living room or hallway, like he is a child who doesn’t want to go to bed.

“After he calms down, he gets into his bed to sleep. So when he starts climbing the walls, we know it’s bedtime,” she said. “He also loves belly rubs when he lays on his back, and a paw massage is also allowed from time to time.” Right now, Thor is focused on being a house cat, but Cucicov admits the attention he’s getting has her thinking about the possibility of calendars and posters.

She’d want the proceeds to go towards charities that help animals.

“Maybe this popularity of Thor is a chance to give more attention to animal rescues and shelters and give them a share in it,” she said. “Because although we have not adopted Thor from an animal shelter, I have lots and lots of respect for the people who open their heart for the animals that are not wanted and who try to help them find their forever home!” Thor is definitely beautiful, but it may be better to look at him rather than be inspired to own a Bengal cat of your own.

Members of the breed are very active, and need a lot of mental stimulation. They also aren’t lap cats and don’t do well being left alone for hours, according to cat behaviorist Marilyn Krieger. And Krieger recommends that those people with their heart set on a Bengal should look into breed-specific rescues and give a cat in need a good home, rather than going to a breeder.