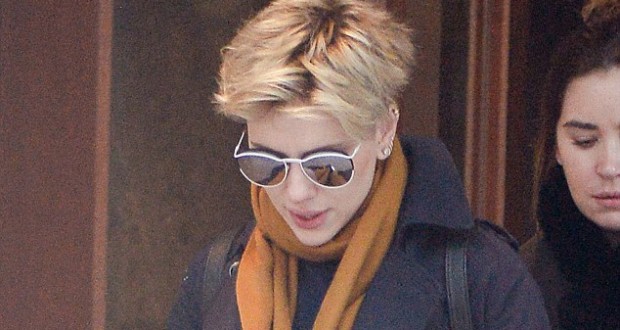 The 32-year-old actress was pictured in New York City on Wednesday morning without her wedding ring.

They were last pictured together in October at the opening of their gourmet popcorn store, Yummy Pop, in Paris.

However, insiders say that ‘they’ve been separated since the summer.’ Shortly after came reports that it was Scarlett who ended the relationship according to a Wednesday report from Us Weekly.

‘Scarlett initiated splitting up and made the decision,’ according to a source for the publication.  They went on to explain that ‘she felt like they didn’t have much in common as far as lifestyle.’ They married in secret at The Ranch At Rock Creek in Philipsburg, Montana in October 2014 shortly after the birth of their daughter.

‘They were really laid back and friendly and almost always had the baby,’ an insider tells E! News at the time.

‘They were holding hands and hugging and smiling and flirting with each other. You could tell they were really happy.’

In 2007 the Lucy star was linked to singer Justin Timberlake, but it is not known if they were romantic.

Scarlett has a slew of new films in the pipeline.

Up next, Scarlett will appear in the sci-fi action movie, Ghost in the Shell, as a robot policewoman attempting to bring down a computer hacker who threatens to destroy her.

The film is set for release on March 31.

On Saturday, Scarlett descended on Washington DC alongside other high profile stars such as Emma Watson, Cher and Jake Gyllenhaal for the Women’s March.