Shares
After much speculation, George and Amal Clooney are reportedly expecting twins, according to The Talk's Julie Chen. 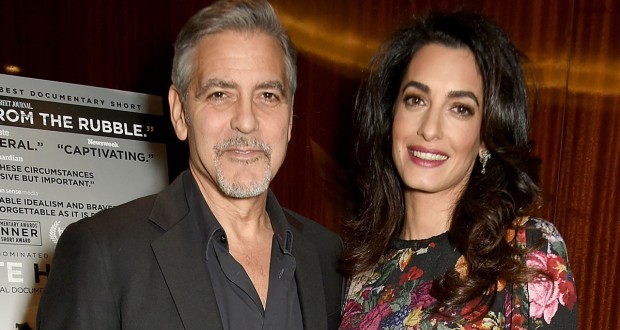 “Beyoncé is not the only superstar expecting twins. Congratulations are in order for George and Amal Clooney,” Chen announced on Thursday’s episode of the CBS daytime program, ET reports.

“The Talk has confirmed that the 55-year-old superstar and his highly accomplished 39-year-old attorney wife are expecting twins. Give her the armrest, by the way, she’s pregnant!”

Chen continued, “Now, what we did find out that no one else is reporting is that the twins are due this June. The two have been married for just about two and a half years.”

Amal has been sporting some lose-fitting, yet oh-so stylish, clothing over the past month, but had yet to confirm if she was in fact pregnant.

In May 2015, George was asked by CBS This Morning’s Charlie Rose if he’s ever considered fatherhood, to which he initially answered, “Not really.”

“I mean, I’ve thought about it, I suppose, but it hasn’t been high on my list,” the Oscar winner continued. “I’ve been asked it a lot lately, because I’ve gotten married and I am doing a movie with kids in it. You should see how different, how creative the way they ask me!”

The two also celebrated their two-year anniversary in September and the actor joked with ET at the time about those skeptics who said “it wouldn’t last.”

“We proved them wrong!” George exclaimed.