Shares
A 150-year-old antique wedding dress lost after a dry cleaners went bust has been located.

Tess Newall, of Morham, East Lothian, spoke of being “distraught” after discovering the dress, which belonged to her great-great grandmother, was missing, according to the BBC.

It followed the closure of Kleen Cleaners in St Mary Street, Edinburgh.

She posted an update on Facebook saying the dress was found “in a crumpled heap” at the closed shop. 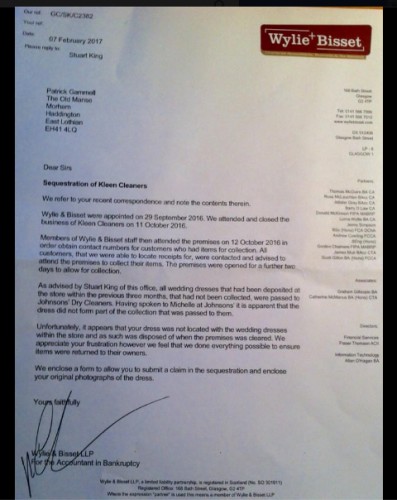 The 29-year-old who married Alfred Newall, 30, in East Lothian, in June, told the BBC she was “absolutely over the moon” at the discovery, and said the last 24 hours had been “surreal”.

The dress was sent to be dry cleaned in September and the shop shut in October.

The business is now being dealt with under Scottish bankruptcy law in a process known as sequestration.

A post by Mrs Newall, about the loss of her dress, was shared more than 200,000 times on social media. 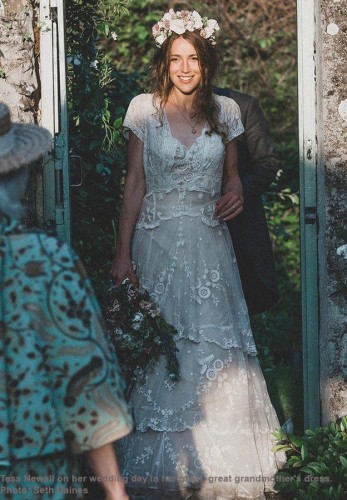 She told the BBC News Channel: “My parents received a phone call this afternoon from the landlord of the property where the dry cleaners is, whose nephew had read about the dress.

“He really searched and he found a pile of old lace which he realised was what he thought was the dress.

“My parents went straight there and were just overjoyed and couldn’t believe it was the dress, not cleaned, and still with its ticket.”

Mrs Newall said a representative from sequestrators Wylie & Bisset was also at the dry cleaners shop on Saturday and insisted that for “procedural reasons” the dress had to go back to his office in Glasgow.

She added: “This is unbelievable and my mum was beside herself, but they have assured us that it will be delivered safely back to us on Monday.

“It’s going to be apparently driven from Edinburgh to my mum and dad’s house.”

The 29-year-old said she still planned to have the dress cleaned, but probably at a lace specialist in London.

She added: “Somewhere where we can’t let it out of our sight.”