Shares
A cat has saved the lives of its owner after raising the alarm during a fire by biting on her arm. 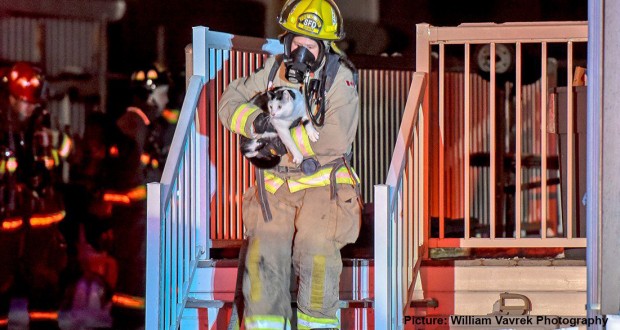 When a fire broke out in a Clairmont mobile home in Canada the family pet reportedly ran to the adult’s room and woke up a woman, Joinfo.com reports with reference to Metro.

The woman, a mother-of-two, told the local fire department that their cat saved them.

Woken at 3:30am, the parents and children were able to flee their house and called for help.

Put in touch with the Red Cross, the family are now staying in another property.

Because of the quick-acting cat’s actions firefighters contained the fire to the base of the mobile home and put it out quickly.

County of Grande Prairie fire Chief Trevor Grant said: ‘It’s pretty interesting to see that it was the cat that did alert them that there was an issue’.

No one was injured but Grant said the family were: ‘Pretty happy with their cat. The cat woke them up with enough time, if they hadn’t been notified it could have definitely been a different result.’

The cat, called a ‘hero’, has not been named and neither have his owners.

It should be recalled that in January, a dog called Kelsy has helped save her owner during a 20-hour, near-death ordeal after a man fell in the snow and broke his neck outside his northern Michigan home.