Shares
A McDonald's employee in Doral, Florida, rescued a police officer on Tuesday after she became unconscious at the restaurant's drive-through window 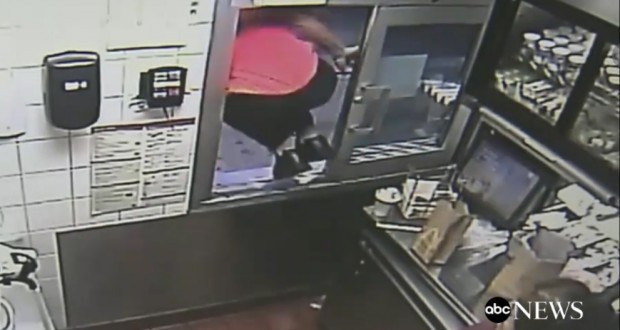 A McDonald’s employee in Doral, Florida, rescued a police officer on Tuesday after she became unconscious at the restaurant’s drive-through window, according to a local ABC News affiliate report.

Viloria said the customer — an off-duty Miami-Dade police officer who had her two children in the backseat — was suffering from a medical emergency.

ONLY ON 10: Surveillance video shows a McDonalds worker jump from the drive thru window to save an unconscious police officer. More at 6pm. pic.twitter.com/JP6fqxCTaS

Viloria said the customer pulled up and paid for her order without a problem, but he noticed that she was having trouble breathing when he returned to the window with her food.

“In that moment, I thought, ‘I’d rather save that woman’s life,'” he told WPLG on Tuesday. “I see she’s, like, inflating her neck, like trying to breathe, like ‘ahh,’ and basically I thought something was going wrong.”

After checking on the customer and finding her unconscious, Viloria said he rushed back into the restaurant to get help.

Thankfully, he did not have to look far.

A customer, who identified herself as a paramedic, jumped into action and assisted the officer, WPLG reported.

Moments later, an off-duty Miami-Dade Fire Rescue worker entered the store and offered his assistance as well, according to the report.

“The real heroes are the fire rescuers,” Viloria told WPLG.

He said the first responders performed CPR on the woman and used an automated external defibrillator to revive her.