Shares
The people with the healthiest hearts in the world live on a tributary of the Amazon River in Bolivia, filling up on starchy food, researchers reported Friday. 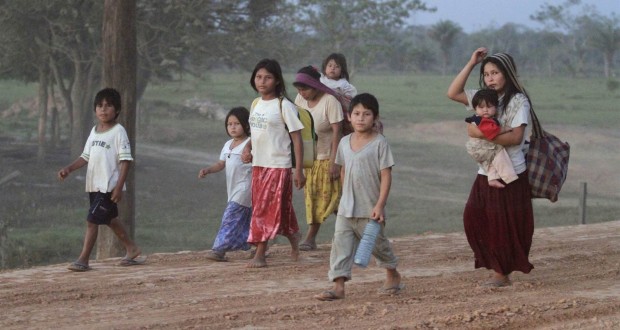 The Tsimane people walk, ride bikes or canoe everywhere. Their staple foods are home-grown rice, plantains and corn. If they want meat, they go catch it. And they don’t watch television, Joinfo.comreports with reference to NBC News.

An 80-year-old Tsimane has about the same heart and artery health as the average American in his or her 50s, the team reports in the Lancet medical journal.

It’s hard to find a Tsimane who has any evidence of clogged arteries at all, Ben Trumble of Arizona State University and colleagues reported.

“Most of the Tsimane are able to live their entire life without developing any coronary atherosclerosis. This has never been seen in any prior research,’ said Dr. Gregory Thomas of Long Beach Memorial Medical Center, who worked on the study.

The group of about 16,000 people — not really a tribe, Trumble says — live as most of humanity did as we evolved. They have no electricity or running water and catch or raise all their own food.

The researchers studied more than 700 Tsimane volunteers, running scans of their arteries, testing their blood for cholesterol and glucose, measuring blood pressure and looking for evidence of inflammation. They looked specifically for calcium in the blood vessels – a signal that artery-clogging fat has built up and hardened.

These plaques can break off and cause heart attacks and strokes.

Most – 85 percent – had no evidence of calcification at all in their arteries, Trumble said. Those who do have very little.

It’s no surprise that people who eat no processed food and who exercise all day long would have little heart disease. What Trumble’s team did was systematically demonstrate it.

And one surprise – the Tsimane have high levels of C-reactive protein (CRP), an indicator of inflammation. In Americans, high CRP levels are linked with heart disease and the risk of heart attack and strokes. Not in the Tsimane.

“They have very high levels of inflammation, yet they show very low levels of heart disease,” Trumble said.

It might not be the inflammation itself so much that causes heart disease, as whatever underlies the inflammation, he said. In Americans, high CRP levels are linked with obesity and smoking. In the Tsimane, they’re caused by parasites and infections.

And the Tsimane don’t have a lot of cholesterol in their blood to start with.

Now the team wants to start looking at each factor individually to see if they can tease out what people in the industrialized world can mimic to lower their risk of heart disease.

“I don’t think there is a silver bullet like, oh just switch your diet to x and you won’t get heart disease,” Trumble said.

“There isn’t one paleo diet. Everyone wants there to be one magic silver bullet.”

Instead, it’s a combination of factors, he said.

“If a Tsimane wants meat for dinner, the average hunt lasts eight hours and covers 11 miles,” he said. “It may not be possible for most Americans to spend 90 percent of their waking hours in physical activity.”

Trumble and colleagues have been working with a team that’s been studying and living with the Tsimane on and off since 2002. They are seeing changes now.

“There are logging roads that have passed through a number of Tsimane communities,” he said. Motorized canoes mean people can get to their communities in a day instead of taking several days to get there.

“There is the potential for some really long-term changes in diet and exercise and life ways,” Trumble said. “Some will be good and some won’t be.”

“Over the last 10 years we have seen increases in LDL (the so-called bad cholesterol) and total cholesterol in general,” Trumble said.

Right now, the average life expectancy of someone who survives childhood is 70. There’s high infant mortality, but people tend to live into older age and to die of pneumonia, other infectious diseases, and in accidents, Trumble said. The team is studying cancer rates now but has seen little evidence of cancer, he said.

Cancer and heart disease are the two leading causes of death in the U.S., and most cases of both are strongly linked to poor diet and too little exercise.

“So, would I live like the Tsimane to reduce my risk of heart disease? No way,” commented Dr. Tim Chico, a cardiologist at Britain’s University of Sheffield, who was not involved in the study.

“But what I would learn from them is that my risk of heart disease is largely determined by what I do, not what I am, and that I can greatly reduce my risk of developing a heart attack if I am regularly active, if I eat a diet rich in vegetables and low in processed foods, maintain a healthy weight, and don’t smoke.”