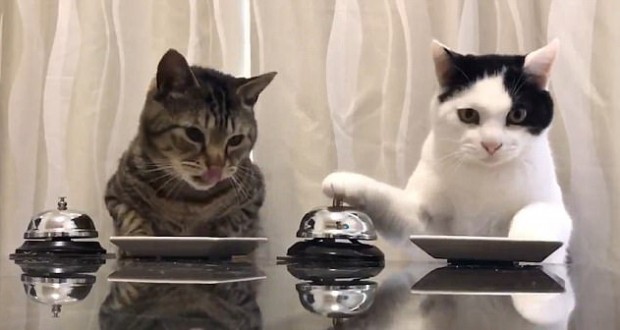 A pair of kittens ‘trained’ a human to bring them treats every time they ring a bell.

In a twist on the famous Pavlov’s Dog experiment, where a canine was conditioned to associate food with the sound of a bell, some Twitter users have suggested in jest that the cats were in fact training the human, according to Daily Mail.

The adorable footage shows the two cats pawing at a bell and then given a treat.

Despite their urgency to scoff the treats, a recent study of 50 cats has found that felines prefer spending time with humans to eating food and playing with toys.

The find could help owners to train their cats using quality time as a reward, the researchers said.

Researchers from Oregon State University monitored the behaviour of cats taken from their owners’ homes as well as animal shelters as part of their study.

‘Domestic cats engage in a variety of relationships with humans,’ the scientists said in a research paper.

‘Nonetheless, it is still common belief that cats are not especially sociable or trainable.

‘This disconnect may be due, in part, to a lack of knowledge of what stimuli cats prefer, and thus may be most motivated to work for.’